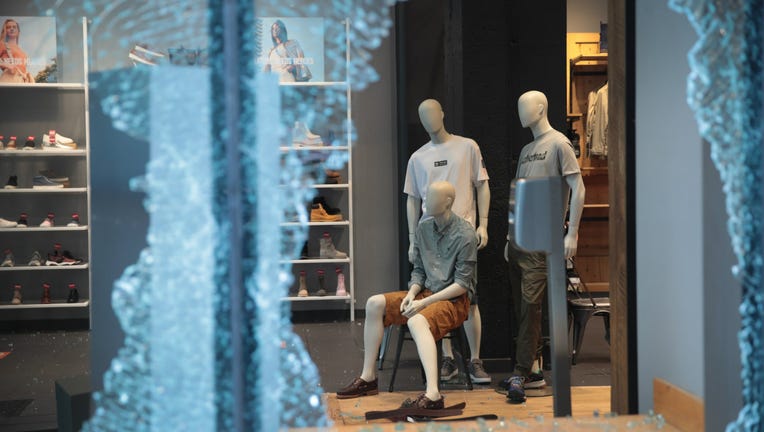 A window is shattered at an Timberland store along Michigan Avenue after it was looted on August 10, 2020 in Chicago, Illinois. Police made more than 100 arrests during the night as widespread looting and disorderly conduct was reported downtown and (Scott Olson/Getty Images)

CHICAGO - Black Lives Matter members in Chicago held a rally on Monday to support the more than 100 arrested last night following widespread looting and rioting that caused at least $60 million in property damage and saw 13 police officers injured, according to a report.

The rally was organized by Black Lives Matter Chicago and was held at a police station in the South Loop where organizers say individuals are currently being held in custody. At least one organizer called the looting tantamount to "reparations." 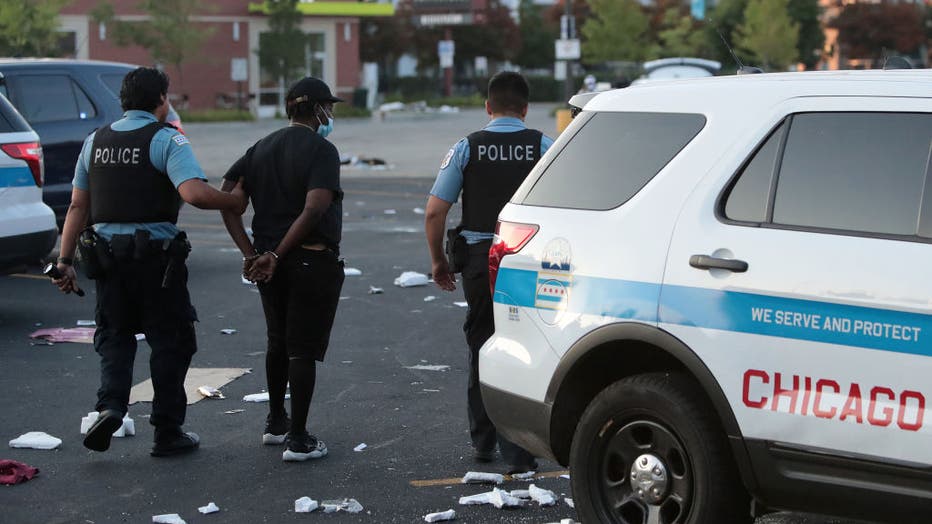 Police officers detain a man who was found inside of a Best Buy store after parts of the city had widespread looting and vandalism, on August 10, 2020 in Chicago, Illinois. Police made several arrests during the night of unrest and recovered at least

“That is reparations,” Atkins continued. “Anything they wanted to take, they can take it because these businesses have insurance.”

The unrest was prompted by a social media post urging people to converge on Chicago’s business district after police shot a man on the South Side around 2:30 p.m. Sunday.

CHICAGO RESTAURANT OWNER ON 'DISTURBING' LOOTING AND RIOTING: 'BUSINESS IS TERRIBLE, THE STREETS ARE EMPTY'

Officers had responded to a call about a man with a gun in the Englewood neighborhood. While being pursued by police, the man, who was on foot, “turned and fired shots” at officers before being struck himself and taken to a local hospital, Deputy Chief Delonda Tally told Fox 32 Chicago.

Latrell Allen, 20, was charged with attempted murder Monday after firing on officers, according to Chicago police. A video posted on Facebook around 6:30 p.m. falsely claimed that officers had shot and killed a 15-year-old boy. 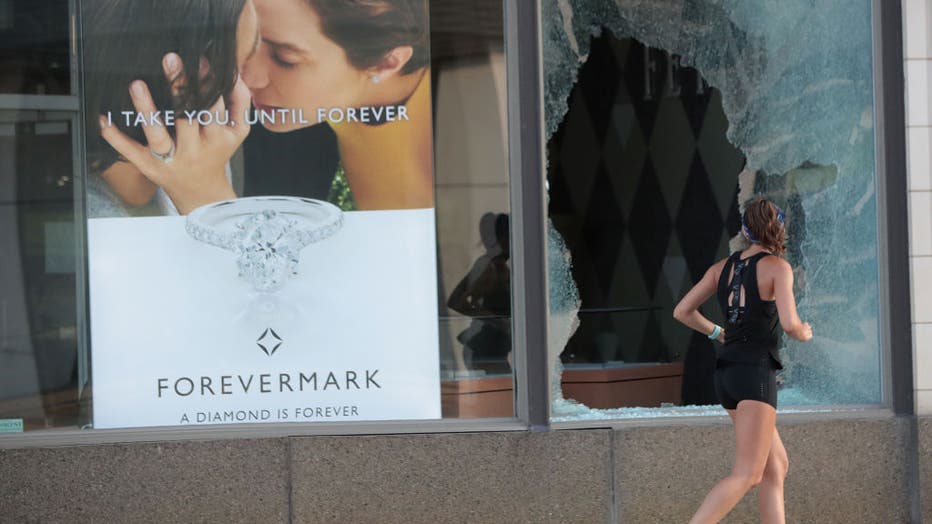 CHICAGO, ILLINOIS - AUGUST 10: A jogger runs past a broken storefront window after parts of the city had widespread looting and vandalism, on August 10, 2020 in Chicago, Illinois. Police made several arrests during the night of unrest and recovered a

The shooting prompted hundreds of people to descend on downtown Chicago early Monday with vandals smashing the windows of dozens of businesses and making off with merchandise, cash machines and anything else they could carry, police said.

“This was not an organized protest. Rather, this was an incident of pure criminality," Police Superintendent David Brown told reporters. "This was an act of violence against our police officers and against our city.”

BLM organizers criticized police reports surrounding the shooting, noting that none of the officers involved had body cameras, which investigators confirmed, according to NBC Chicago.

Black Lives Matter Chicago issued a statement obtained by the Chicago Sun-Times that read, “The mayor clearly has not learned anything since May, and she would be wise to understand that the people will keep rising up until the [Chicago Police Department] is abolished and our Black communities are fully invested in,” the group said in a statement.

“Police say a lot of things,” Atkins added. “Even though the Department of Justice said with the consent decree they are no longer allowed to chase people, they decided they were going to chase, and they shot this young man multiple times."

Fox News' Bradford Betz and The Associated Press contributed to this report.