President Biden delivered remarks on Wednesday and stressed the time is now to act on his infrastructure plan. Biden said that he plans to raise the corporate tax rate and eliminate deductions that corporations are receiving for off-shore jobs.

WASHINGTON - President Joe Biden on Wednesday said he would be open to "good-faith negotiations" on his proposed $2.3 trillion U.S. infrastructure plan that would largely be funded by an increase in corporate taxes.

Many Republican lawmakers have opposed the plan because of its tax hikes and what they say is an overly broad definition of infrastructure.

"We'll be listening. We'll be open to good ideas and good-faith negotiations, but here's what we won't be open to: we will not be open to doing nothing," Biden said in remarks from the White House. "Inaction simply is not an option."

Biden last week proposed a massive infrastructure plan funded by an increase in the corporate tax rate to 28% and an expanded global minimum tax set at 21%.

The ambitious infrastructure plan looks to commit $621 billion toward rebuilding the nation’s roads, bridges and highways, as well as installing electric vehicle charging stations and other transportation infrastructure. The spending would push the country away from internal combustion engines that the auto industry views as an increasingly antiquated technology.

In addition, $111 billion would go to replace lead water pipes and upgrade sewers. Broadband internet would blanket the country for $100 billion. Separately, $100 billion would upgrade the power grid to deliver clean electricity. Homes would get retrofitted, schools modernized, workers trained and hospitals renovated under the plan, which also seeks to strengthen U.S. manufacturing.

The president responded to Republican criticism that his infrastructure plan goes beyond traditional transit, saying trains and highways weren’t always seen as infrastructure.

"The idea of infrastructure has always evolved to meet the aspirations of the American people and their needs. And it is evolving again today," Biden said. 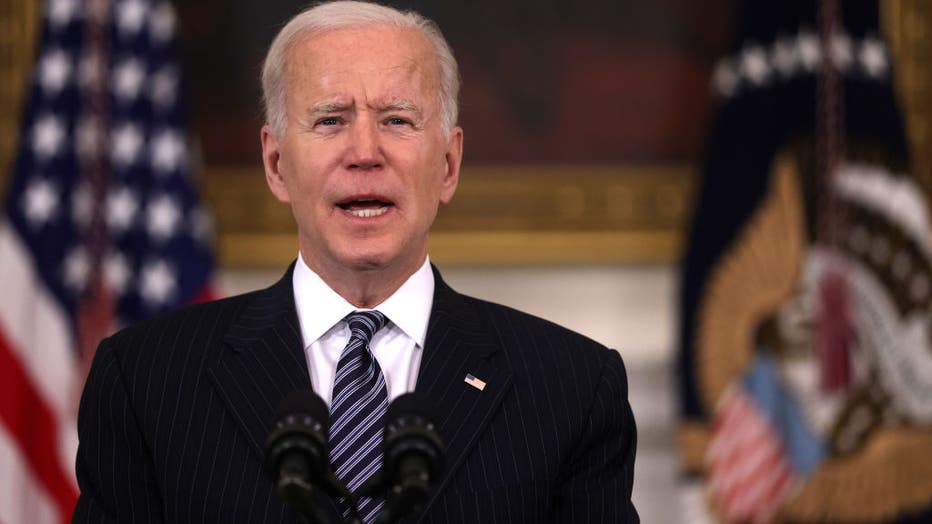 President Joe Biden delivers remarks on the state of vaccinations in the U.S. in the State Dining Room of the White House April 6, 2021 in Washington, D.C. (Photo by Alex Wong/Getty Images)

Treasury Secretary Janet Yellen said earlier Wednesday that the plan would double-down on investing in workers' skills and traditional infrastructure such as roads and bridges as well as modern infrastructure such as broadband. The increases would produce roughly $2.5 trillion in revenues over 15 years, enough to cover the eight years' worth of infrastructure investments being proposed.

The roughly $200 billion gap between how much the taxes would raise and how much the administration wants to spend suggests there is space to address critics, such as West Virginia Sen. Joe Manchin, a key Democratic vote, who would prefer a 25% rate.

Commerce Secretary Gina Raimondo also said Wednesday that businesses and lawmakers should come to the bargaining table, noting that there could be room to negotiate on the rate and timeline.

"There is room for compromise," Raimondo said at the White House briefing. "What we cannot do, and what I am imploring the business community not to do, is to say, ‘We don’t like 28. We're walking away. We're not discussing.'"

The founders of Amazon and Lyft both said this week they support an increase in corporate taxes to help fund "bold investments in American infrastructure."

Lyft co-founder and President John Zimmer called it a "smart investment." Amazon founder and CEO Jeff Bezos this week said in a statement that he also supports the plan, adding that the "investment will require concessions from all sides—both on the specifics of what’s included as well as how it gets paid for (we’re supportive of a rise in the corporate tax rate)."

Key to the Biden administration's pitch is bringing corporate tax revenues closer to their historic levels, rather than hiking them to new highs that could make U.S. businesses less competitive globally.

Trump's 2017 tax cuts halved corporate tax revenues to 1% of gross domestic product, which is a measure of the total income in the economy. Revenues had previously equaled 2% of GDP. That higher figure is still below the 3% average of peer nations in the Organization for Economic Co-operation and Development, the Treasury Department said in its summary of the plan.

Yellen also said the 2017 tax cuts failed to deliver on Trump's promise of an accelerating economy. Instead, the cuts encouraged other countries to keep reducing their own tax rates in a "race-to-the-bottom" that the Biden plan believes can be halted with an enhanced minimum tax and agreements with other nations.

The infrastructure investments would increase the level of GDP in 2024 by 1.6%, according to estimates by Moody's Analytics.

But the proposal has also drawn criticism from business groups such as the U.S. Chamber of Commerce and the Business Roundtable, which argue that higher taxes would hurt U.S. companies operating worldwide and the wider economy.

The Penn-Wharton Budget Model issued a report Wednesday saying the combined spending and taxes would cause government debt to rise by 2031 and then decrease by 2050. But following the plan, GDP would be lower by 0.8% in 2050.

The Associated Press contributed to this story. It was reported from Cincinnati.