CHICAGO - A Chicago man raised his hands and told officers "I give up" after carjacking a man at gunpoint and leading police on a chase that prompted a lockdown on Northwestern University’s Chicago campus Monday.

Trimane Omar Kimbrough, 19, is charged with aggravated vehicular hijacking, unlawful use of a weapon, criminal trespass to property and leaving the scene.

According to prosecutors, a 37-year-old victim was double-parked and seated in the driver's seat of his red 2010 Mazda 6 in the 2000 block of West Arthur Avenue waiting for his girlfriend to give her a ride to work.

While the victim was waiting, a gray 2001 Saturn allegedly drove past the victim and stopped in front of his vehicle.

The victim said the vehicle was occupied by a driver and front seat passenger.

The front seat passenger, later identified as Kimbrough, exited the vehicle and approached the victim's Mazda.

The 19-year-old then allegedly opened the victim's driver side door and pointed a handgun at his head. Kimbrough told the victim to get out of the vehicle, and the victim complied, prosecutors said.

Kimbrough allegedly pushed the victim as he was exiting the vehicle. 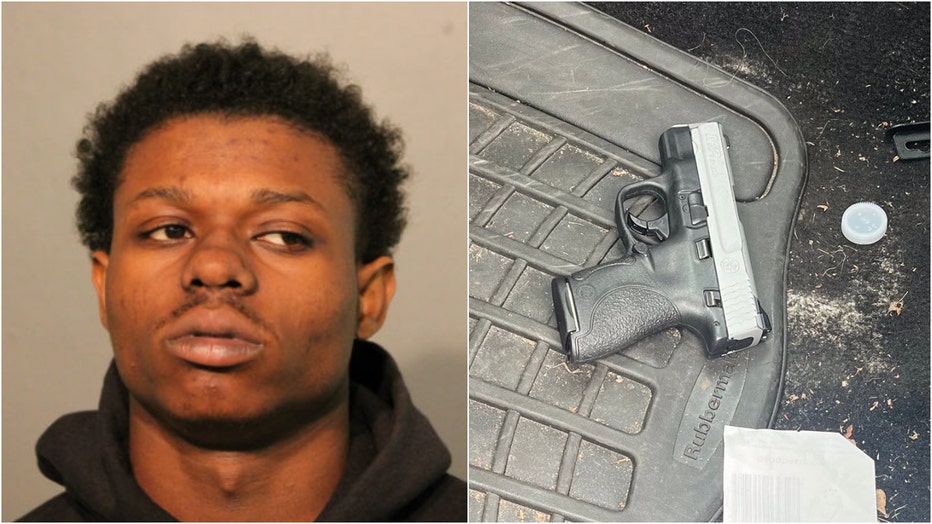 Prosecutors say that Kimbrough entered the Mazda and took off down the street, along with the Saturn.

Surveillance video was obtained and showed the Saturn pull up, Kimbrough exit the vehicle, walk toward the victim's vehicle where an altercation ensued.

Officers then obtained a License Plate Recognition hit for the victim's vehicle at 5198 N. Lakeshore Drive at 12:54 p.m.

The victim's vehicle was seen stopped at a red light on Lakeshore Drive and Chicago Avenue, police said.

Officers blocked in the vehicle, and allegedly observed Kimbrough as the driver and only occupant of the vehicle.

When officers began exiting their vehicles, Kimbrough allegedly exited the victim's vehicle and fled toward Lakeshore Park. The vehicle was left in drive before Kimbrough exited, which caused the vehicle to strike a squad car, prosecutors said.

Officers pursued Kimbrough through the park and into Northwestern University School of Medicine.

Northwestern surveillance video allegedly shows Kimbrough enter the building at 1:03 PM. He was allegedly seen wearing a blue surgical mask partially over his face and is observed taking off his jacket, revealing a black sweater underneath, prosecutors said.

The officers lost sight of Kimbrough and the building was placed on lockdown.

Kimbrough was eventually located walking in a basement hallway at 2:03 p.m., with only one shoe on and wearing a black sweater, prosecutors said.

Kimbrough allegedly placed his hand up and told officers, "I give up."

His clothing, mask and other shoe were scattered in the building stairwells.

A gun was allegedly located in the victim's vehicle where Kimbrough was seated.

The handgun was reported stolen, and there was one live round in the chamber.

The Saturn Kimbrough allegedly exited before carjacking the victim's vehicle was reported stolen in March, and has not yet been located.

Officers also obtained Kimbrough's phone, which he had on him when he was arrested.

According to prosecutors, text messages that were on the phone instructed Kimbrough to "try and get low" and "change yo clothes" while he was fleeing.

The Sun-Times contributed to this report.