There were 45 people who were injured or killed in the attack, which was thought to have been planned by the alleged gunman, Robert Crimo III, for several weeks.

HIGHLAND PARK, Ill. - The 21-year-old suspect in the Highland Park Fourth of July parade mass shooting is believed to have been turned away from a synagogue in the North Shore community in April, according to the head of a Jewish security organization.

A man who looks like Robert E. Crimo III entered the Chabad synagogue during Passover, said Michael Masters, chief executive officer of Secure Community Network, which is headquartered in Chicago.

Masters said Crimo wasn’t on his organization’s radar until Monday, after police, identifying him as the suspect in the massacre that killed six people and left dozens wounded, released a photo of Crimo showing the tattoos he has on his face and neck.

"The rabbi recognized him from pictures as the same individual who visited the synagogue in April," Masters said. "Security encountered him. There was a conversation with the individual and he ultimately left."

The rabbi couldn’t be immediately reached.

Masters’ group works with the FBI and the federal Department of Homeland Security to protect Jewish facilities across the country. It provided training at Congregation Beth Israel in Colleyville, Texas, near Fort Worth that the rabbi and three congregants said they relied on when a gunman took them hostage early this year.

Highland Park has a large Jewish population, but Masters said his organization hasn’t found any information to make him think the motivation for the shootings was antisemitism.

"Nothing overtly we have identified in his social media posts says this was an antisemitic attack, but we are coordinating with law enforcement," Masters said. "Apparently on social media, there are some indications he was ideating around the Fourth of July for some period of time, which would indicate this was not an attack on one particular community."

Authorities said Tuesday they didn’t have any information the attack targeted anyone by race or religion.

Meanwhile, if Bobby Crimo had been planning the Highland Park parade shootings for weeks — or if he owned a high-powered rifle, as police said Tuesday — Paul Crimo, who lived under the same roof as his nephew, never suspected anything.

Law enforcement officials revealed more details Tuesday about the suspected gunman in the Highland Park parade shooting that left six people dead and over 30 others wounded.

But Paul Crimo and his nephew, who shared a pale gray stucco home in the wealthy North Shore suburb of Highwood for the past two years, lived very separate lives — the uncle in the main part of the two-story house that has been in the family for generations, Bobby Crimo in an apartment at the rear, Paul Crimo said Tuesday.

Paul Crimo last saw his nephew about 5 p.m. Sunday. The young man, as he liked to do from time to time, was lying in his uncle’s recliner in the main part of the house — looking at his cellphone.

Other neighbors on Pleasant Drive said they rarely, if ever, saw Bobby Crimo. He wasn’t the type to come out and shoot the breeze. He would zip by, music blaring, on an electric scooter.

"I never saw him outside," said a neighbor who agreed to be identified only as Steve. "I never saw people his age in the house."

But there were no visits from the police to the house that anyone noticed — or anything else that seemed untoward, neighbors said. It was only Monday when a SWAT team arrived that neighbors took particular notice of the slightly shabby-looking stucco home.

Paul Crimo said the FBI showed up Monday but left without taking anything.

Bobby Crimo was arrested while driving a Honda Fit. His uncle said the young man owns a silver Acura, which sat in the Crimos’ front yard Tuesday, weeds growing up around the tires. The number "47" is painted in large black-and-gold letters on the driver and passenger side doors. Paul Crimo didn’t know what it meant. He also knew nothing about his nephew’s music career; he doesn’t like rap music. 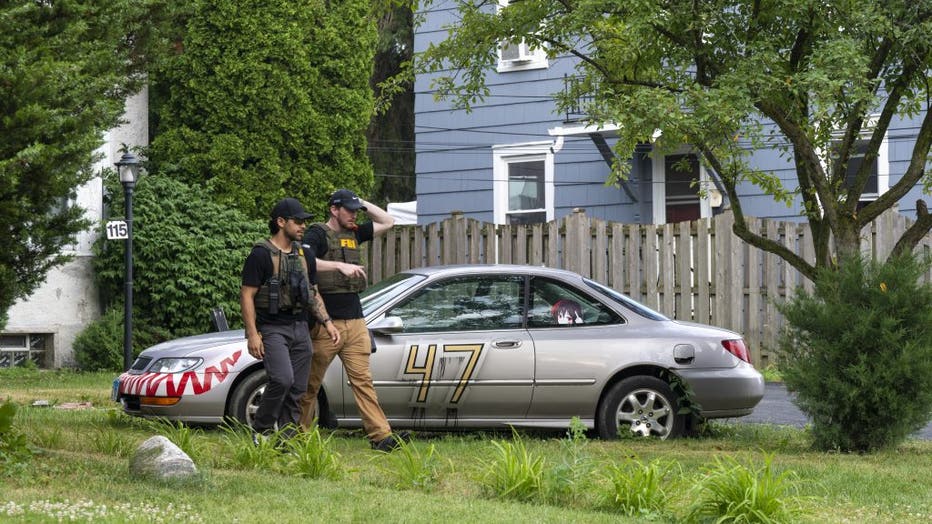 Federal inspect two houses in Highland Park that’s associated with the suspect in a mass shooting where 6 people were killed and at least 2 dozen where injured at a Fourth of July parade in Highland Park, Monday, July 4, 2022. | Tyler Pasciak LaRivie

Bobby Crimo had a job at Panera Bread but lost that position two years ago at the onset of the pandemic. Bobby Crimo was currently unemployed, his uncle said.

Paul Crimo said he learned about his nephew’s alleged involvement in the parade shootings when he saw the 21-year-old’s face posted on social media.

"I can’t even believe it. I feel sorry for all the families [of the victims]. My heart goes out to them," Crimo said.