"The attack in Highland Park was the 309th mass shooting in America this year. There have been 47 more mass shootings since the Fourth of July," Durbin said.

Durbin and others would ban the sale and manufacture of powerful, military-style firearms that have become the weapons of choice for mass killers who now strike more than once a day. 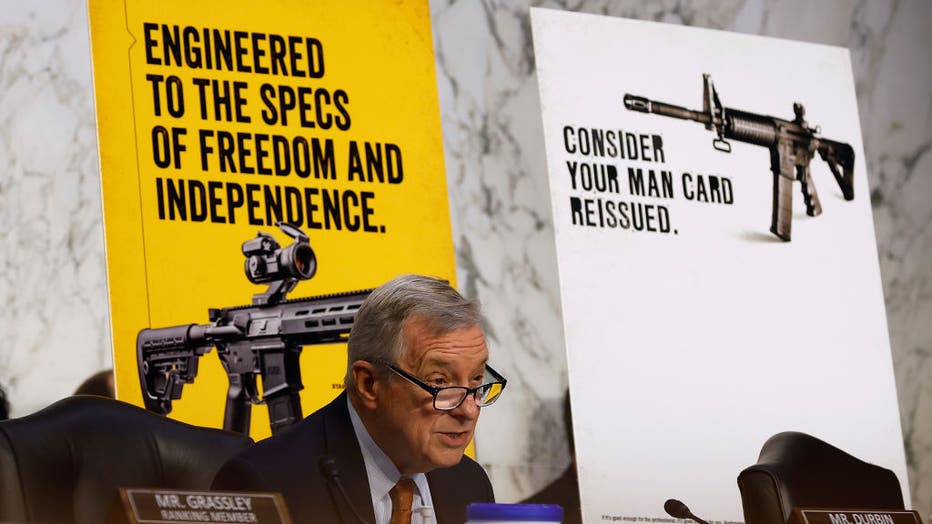 Senate Judiciary Committee Chairman Richard Durbin (D-IL) speaks in front of a published advertisements for assault weapons during a hearing about the mass shooting in Highland Park, Illinois, and civilian access to military-style weapons in the Hart

The committee's ranking Republican Sen. Chuck Grassley promised to block that, instead offering a plan to instruct Americans on how to spot potential mass shooters.

Grassley quoted a study from 2004 that claimed a 10-year-long assault weapons ban had done little or nothing to reduce killings.  '

The deadly epidemic that shows no sign of stopping - mass shootings. Over 300 of them across the U.S. this year alone, and the crisis keeps hitting home. From Chicago, to Gary, to Highland Park, no one is immune from these senseless tragedies. What will it take to stop it?

There is nearly universal agreement on Capitol Hill that there are not enough votes in the Senate to approve a ban on civilian purchase and use of military-style weapons.