There were 232 lawmakers who voted in favor of impeaching President Donald Trump, including Illinois Rep. Adam Kinzinger.

CHICAGO - For the first time in history, a president has been impeached twice.

There were 232 lawmakers who voted in favor of impeaching President Donald Trump, including Illinois Rep. Adam Kinzinger.

Kinzinger was one of 10 House republicans who voted in favor of impeachment, and late Wednesday afternoon, he posted a statement on Twitter saying:

"It was a sobering moment to vote in support of impeachment today; to walk over to the U.S. Capitol, our symbol of democracy, and recall the violent insurrection we witnessed here just one week ago. This is not a vote I took lightly, but a vote I took confidently. I'm at peace." 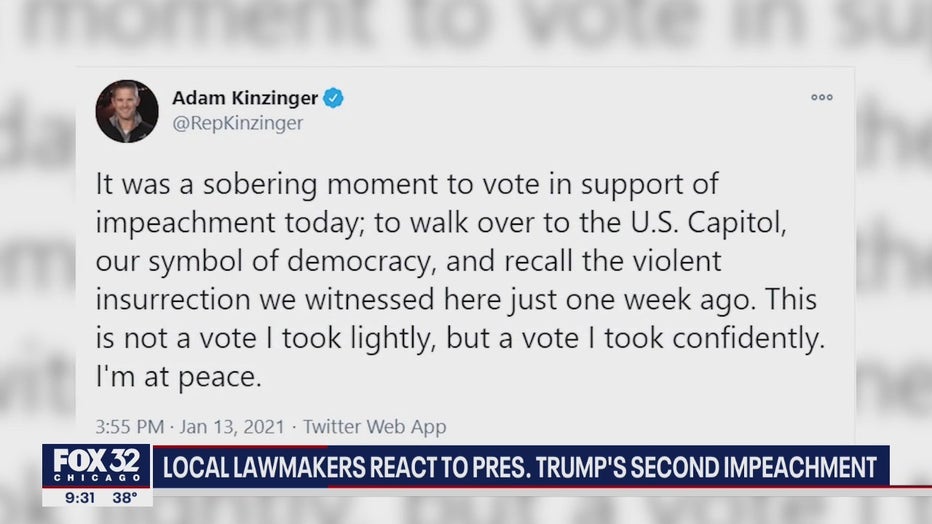 "We have to make it clear that his conduct is unacceptable for any president at any time, now or in the future," said Foster.

Illinois Congressman "Chuy" Garcia issued a statement after voting to impeach President Trump, saying in part, "I voted to impeach Trump once, and I did so again today. The President remains a clear and present danger to the Constitution and democracy."

Illinois Congressman Darin LaHood voted against impeachment saying, "Pushing articles of impeachment days before the inauguration will only inflame and further divide our country."

U.S. Sen. Tammy Duckworth said the senate now has to act immediately to remove what she calls a "dangerous man from office."