Capitol police officers shared their experiences Tuesday during the first hearing of a committee investigating what happened during the Jan. 6 siege.

Rep. Adam Kinzinger, R-Ill., has committed to remaining a member of the Republican Party despite being one of its toughest critics following the Jan. 6 riot at the U.S. Capitol.

"I'm a Republican at heart. I was a Republican way before Donald Trump, since I was six years old," Kinzinger told CNN's Wolf Blitzer on Wednesday.

Kinzinger has emerged as a prominent anti-Trump voice in the party amid his vote for the impeachment of the former president and as a member of the House select committee investigating the Capitol riot.

"I believe in the values I’m fighting for and I believe that a party with such a great, rich history deserves to have people, even if it’s only a couple of us at the moment, in there fighting to restore the soul of it. So I'm going to fight hard for that," he said after Blitzer asked him if he was still "comfortable" being a member of the party and if he had given any thought to becoming a Democrat ahead of the 2022 midterm elections. 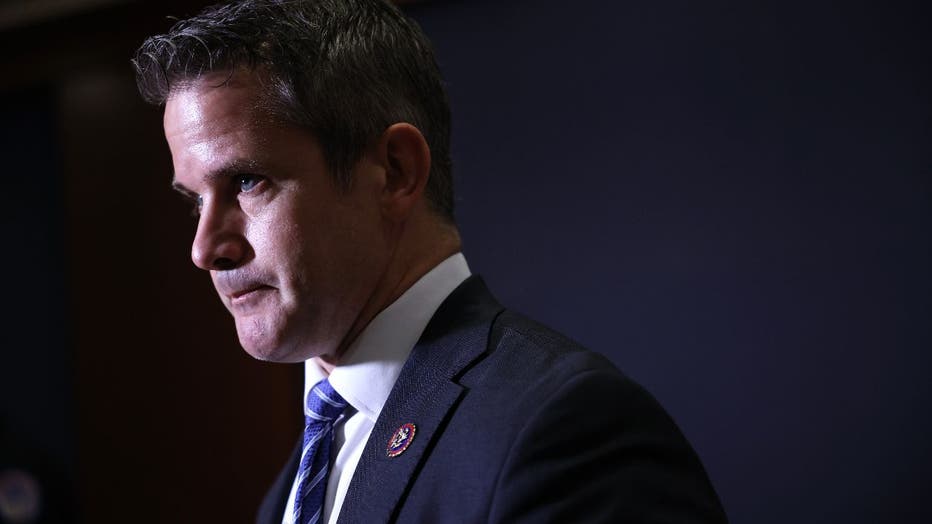 Rep. Adam Kinzinger (R-IL) speaks after the Republican House caucus voted to remove Rep. Liz Cheney (R-WY) of her leadership, at the U.S. Capitol on on May 12, 2021 in Washington, DC. (Kevin Dietsch/Getty Images)

Kinzinger became a more outspoken detractor of the GOP following widespread claims of election fraud in the 2020 election. He ramped up his criticism after the Capitol was overrun by Trump supporters during certification of President Joe Biden's victory on Jan. 6,, and he subsequently became one of ten Republican House members who voted to impeach Trump.

In February, he launched a new PAC called "Country First" that he said was intended to "take back" the Republican Party from Trump. He said in a video announcing the launch of the PAC that "today's Republican Party is not the one I joined."

Kinzinger was selected, alongside Rep. Liz Cheney, R-Wyo., by Speaker Nancy Pelosi, D-Calif., to serve on the committee investigating the Jan. 6 riot, which led to him being criticized by his fellow Republicans, including House Minority Leader Kevin McCarthy, R-Calif. McCarthy referred to Kinzinger and Cheney as "Pelosi Republicans" after they accepted the committee seats.

In the wake of his outspoken criticism and participation on the Democrat-backed committee, Kinzinger now faces a primary challenge in Illinois' 16th District. Staunch Trump ally Rep. Madison Cawthorn, R-N.C., endorsed Kinzinger challenger Catalina Lauf, who served as a Department of Commerce appointee in the Trump administration.