Some in the audience appeared shocked by the mayor’s use of vulgarity in public. Others seemed delighted and repeated it.

Lightfoot appeared undaunted as she continued her attack on Thomas. "He thinks that we are going to stand idly by while they take our rights," the mayor said.

By 1:30 p.m. Monday, more than 775,000 people had viewed the video of the mayor, including five of the seven mayoral challengers. The mayor’s office refused to comment.

Former Chicago Public Schools CEO Paul Vallas said no matter how incensed the city’s first openly gay mayor is about the suggestion made in Thomas’ concurring opinion, she owes it to the office she holds and the constituents she represents to conduct herself with decorum.

"Even if you were echoing what somebody else said in the crowd, it’s dangerous and totally inappropriate," he said. "You’re almost trying to agitate people to violence when you think about it. … If that’s not an invitation — if that’s not sanctioning it through your rhetoric — I don’t know what does."

Millionaire businessman Willie Wilson wholeheartedly agreed. "Using that kind of language just, in my opinion, encourages violence. I condemn all things that would make anybody feel or give the impression of violence. That just ain’t the way to go."

Mayoral challenger Kam Buckner said he, too is "clearly nervous about what the slippery slope" might be. But Buckner said that doesn’t excuse the mayor’s language.

"We’ve got to be smart about our rhetoric and about making sure we bring down the temperature and adding more humanity and more thoughtfulness into our politics," he said. 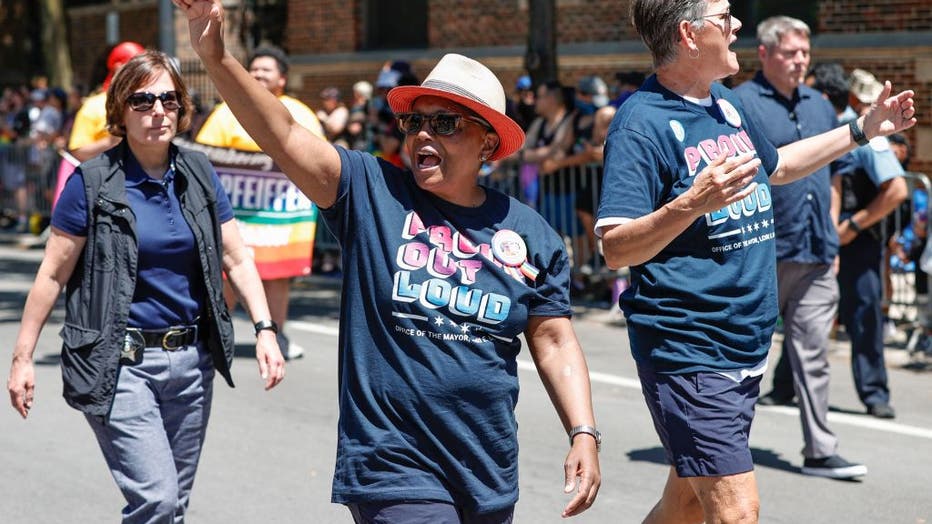 Mayoral challenger Ray Lopez said Lightfoot’s vulgar language is more evidence that she lacks the temperament to serve as an effective mayor of Chicago.

"Either you’re pandering just to get votes or you have no respect for the office you hold," said Lopez, one of the mayor’s most outspoken City Council critics. "It’s undignified and it’s beneath the city of Chicago to act in this manner — especially in public. It takes vulgarity to a whole new level and further diminishes the office and the respect we hope people have for it.

"She needs to apologize," he added. "Our youth, our future leaders watch her actions. To normalize this kind of vitriol response when you don’t get your way is just bad leadership, albeit a hallmark of her administration."

Mayoral challenger Ja’Mal Green had a different take. He accused Lightfoot of brazenly using the Supreme Court ruling to "lure voters" while saying nothing at all about the fatal shooting of a 5-month-old baby girl."

"We need solutions right now to what’s going on … right here at home. But instead, she would rather grandstand on stage using this language because she knew it would get a certain reaction so she can get her approval numbers up. But, our babies are dying still right now," Green said.

It’s not the first time Lightfoot has been accused of using profanity.

During the civil unrest triggered by the death of George Floyd that devolved into two devastating rounds of looting in the summer of 2020, Lightfoot unleashed a profanity-laced tirade against Lopez.

It happened when Lopez accused the mayor of being caught flat-footed after the first round of looting that spread into South and West side neighborhoods after downtown was belatedly sealed off.

Lightfoot famously warned members of the Black Caucus who dared to vote against her 2021 budget, "Don’t ask me for s—t" when it comes to choosing projects for her five-year, $3.7 billion capital plan.

And most recently, Lightfoot branded as "deeply offensive," "ridiculous" and "wholly lacking in merit" the claim that she made an obscene and derogatory remark against Italian Americans during a call to discuss the statue of Christopher Columbus removed from Arrigo Park.