Near the end of the demonstration, police and protesters clashed briefly. A few protesters could be seen on helicopter video being put into the back of squad cars. Other than that, the protest was peaceful. 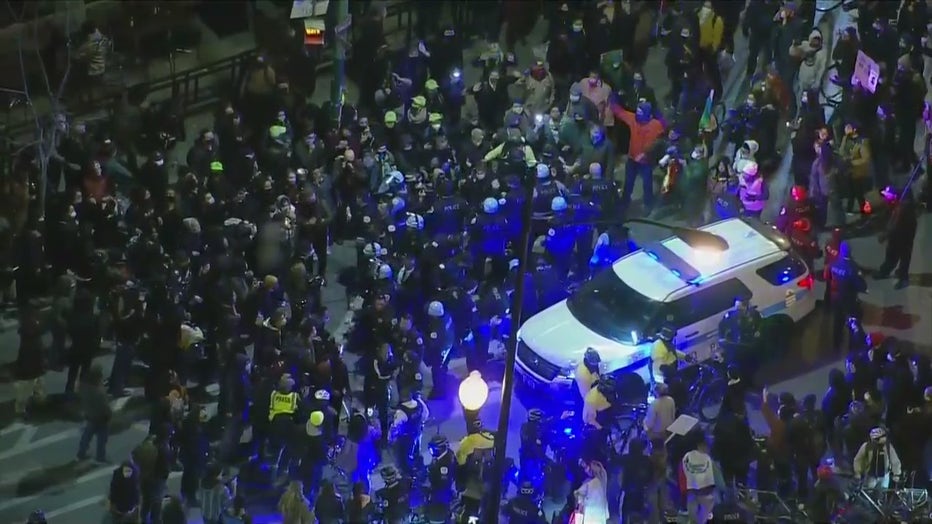 Chicago police and protesters briefly clash at the end of the night. A few protesters were detained.

CPD says the two arrests occurred in the 2600 block of North Kedzie.

Graham Lefauve, 18, was arrested for misdemeanor battery at approximately 9:45 p.m.

Lefauve was on a bicycle and rode past uniformed CPD officers in an unmarked Chicago Police vehicle and spit into the vehicle, striking one of the officers.

"There was nothing that happened out there that warranted the arrest of any young people who were out there fighting for their lives," Tendaji said. "They [the police] were brutal to those protesters and there are no signs of it slowing down."

At one point in the evening, a group of children were seen handing out water bottles to police officers working into the night.

Among the thousands marching Friday evening through Chicago protesting the police killing of 13-year-old Adam Toledo, a group of children were handing out water bottles to officers working into the night.

Toledo was shot and killed by a Chicago police officer on March 29, following what CPD called an "armed confrontation."

Video footage shows a foot pursuit and the officer yelling for Toledo to stop and show him his hands.

WARNING: GRAPHIC VIDEO. SOME MAY FIND THESE VIDEOS DISTURBING. WATCH AT YOUR OWN DISCRETION.

The Civilian Office of Police Accountability had been pressured by community activists, Mayor Lori Lightfoot and others to release the footage since authorities identified him four days after his death.

The family of Toledo viewed the video footage and other materials related to the shooting on Tuesday.

Lightfoot on Thursday said she had viewed the police body camera videos of the fatal police shooting of Toledo, calling them "excruciating" to watch. She urged the public to remain peaceful following the videos release.

Live updates from Friday following release of the video:

Both offenders were arrested in the 2600 block of North Kedzie.

Graham Lefauve, 18, was arrested for misdemeanor battery at approximately 9:45 p.m.

Lefauve was on a bicycle and rode past uniformed CPD officers in an unmarked Chicago Police vehicle and spit into the vehicle, striking one of the officers. The offender was placed into custody.

9:15 p.m. If you live in Logan Square or are headed to the area, there are many road closures. Protests due remain peaceful, however, it is unknown how long streets in the area will be closed.

9 p.m. Protesters continue to march through Logan Square. Police continue to say that things have remained peaceful. FOX 32's Anthony Ponce breaks down the route of the protest.

Protests continue into the night in Logan Square.

8:45 p.m. Groups have broken off from the large protest, however, there are still hundreds of people marching through the streets. Several road closures are still in place.

8 p.m. Chopper flies over a growing crowd of thousands of protesters in Logan Square.

Thousands of protesters march through Logan Square for Adam Toledo

7:30 p.m. Chicago police say protesters are following road closures and remain peaceful as they march through the streets of Logan Square.

6:30 p.m. Chopper flew over the scene of several hundreds of people calling for justice for the 13-year-old.

Skyview of protests in Chicago for Adam Toledo

5:30 p.m. Protesters began to gather with signs calling for justice for Adam.

FOX 32's Brittany Garzillo was live on the scene: