The CEO of McDonald’s told business leaders in Chicago that tough economic conditions including rising crime have made it more difficult to attract employees and suggested the city does not have an adequate plan in place to address the issues and prevent companies like his from joining the growing list of companies that have fled the Windy City.

CHICAGO - The CEO of McDonald’s told business leaders in Chicago that tough economic conditions including rising crime have made it more difficult to attract employees and suggested the city does not have an adequate plan in place to address the issues and prevent companies like his from joining the growing list of companies that have fled the Windy City.

"Everywhere I go, I’m confronted by the same question," McDonald’s President and CEO Chris Kempczinski said in a speech at the Economic Club of Chicago luncheon on Wednesday. "‘What’s going on in Chicago?’ There is a general sense out there that our city is in crisis."

Kempczinski said that it’s necessary to "face facts" and acknowledge that companies have been leaving the area over the past year due in part to rising crime. 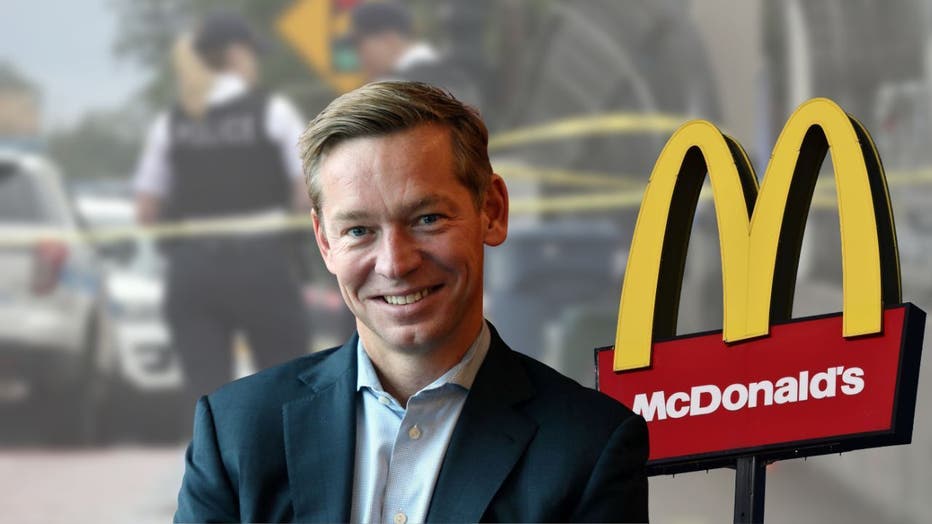 "The facts haven’t been especially kind to the city of Chicago as of late," Kempczinski explained. "The fact is that there are fewer large companies headquartered in Chicago this year than last year. There are fewer this month than last month."

Kempczinski added that he has heard people "discount the significance" of companies like Citadel and Caterpillar leaving the Chicago area recently and said he thinks "we can all agree their departure is not good news for our city."

Kempczinski revealed that it is "more difficult" for him to recruit "promising" white collar executives to work in Chicago than it was just a few years ago.

"Truth is, it's more difficult for me to recruit a new employee to McDonald's to join us in Chicago than it was in the past," Kempczinski said, while adding that he loves the city and is one of the strongest "ambassadors" for the area.

Six people were killed and 28 were shot — seven of them teens — over the weekend in Chicago.

McDonald’s operates more than 400 restaurants in Chicago and is headquartered in the city’s West Loop district which brings the company’s contribution to the city to a total of $2 billion annually and employees tens of thousands of people, Kempczinski said.

Kempczinski said that the first issue that needs to be addressed in the city is rising crime, which has been cited as the reason for leaving by many of the companies who have pulled out in recent months.

"I don’t have to tell you why this matters, you all recognize and understand the statistics," Kempczinski said. "All of us, every single person in this room has seen the corrosive effect that crime can have on the city, its psyche, and its citizens."

In a question and answer session following his speech, Kempczinski talked about ways crime and homelessness has negatively affected employees and customers at McDonald's restaurants as well as employee at the corporate office.

Kempczinski said it has taken "cajoling" to convince employees to return to work at the downtown office due to safety concerns.

"It has become increasingly difficult to operate a global business out of the city of Chicago and the state of Illinois," Kempczinski said.

Chicago is spending $52-million this year on violence prevention, with a focus on 15 communities hardest hit by crime.

While mentioning multiple times that Chicago has a lot to offer, Kempczinski warned that his company staying in Chicago long term is not a foregone conclusion.

"Make no mistake, though, McDonald's commitment to the city of Chicago isn't corporate altruism," he said. "It's not open-ended. It's not unconditional. As a publicly traded company. Our shareholders wouldn't tolerate that. They wouldn't support that."

Kempczinski also said that he has received calls from mayors and governors attempting to convince him to relocate McDonald’s to other areas.

Rather than relocate, Kempczinski says he is adding 100 more McDonald’s jobs to the area but acknowledged that if he is receiving calls from politicians in other areas that other companies in Chicago surely are as well.

"Can you imagine Chicago without McDonald’s?" Kempczinski said after explaining that the tax base in the city would erode and programs and institutions would suffer if the company were to leave. "I cannot."

"Our move back home to Chicago is about more than a building – it’s symbolic of our journey to transform our brand and become more closely connected with our customers," the company said in a statement at the time. "Our new location enables us to better listen, learn and engage with our customers whilst providing a modern, worker-friendly headquarters that fosters collaboration and re-energises employees. We are thrilled to join the West Loop and add to the vitality of this community."

In addition to the "untold human impact" of rising crime, Kempczinski voiced concerns about the business climate in Chicago while citing the nonpartisan Illinois Tax Foundation ranking of Illinois as 36th out of 50 states in terms of favorable business climate.

Chicago Mayor Lori Lightfoot's office did not immediately respond to a request for comment from Fox News Digital.