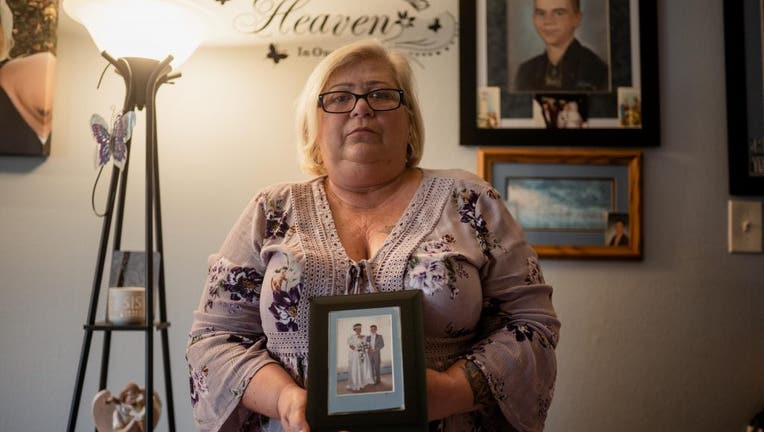 Debra Fahrforth, the mother of 12-year-old Joey Chlopek who was shot by a Chicago police officer in 1992, poses with a photo of her and her son in her home in Willow Springs, Ill., Friday morning, April 16, 2021. | Pat Nabong/Sun-Times

CHICAGO - A young boy is handed a gun by someone older, chased down a Southwest Side alley by a police officer and shot to death.

It’s a series of events now commanding the attention of Chicago, which had been anxiously awaiting the release of police body camera video of the fatal shooting of 13-year-old Adam Toledo.

But a tragically similar scenario played out nearly 30 years ago when an officer shot and killed a 12-year-old boy in the Brighton Park neighborhood — the youngest Chicago police shooting victim in recent memory.

Debra Fahrforth still doesn’t believe her son had a gun, as police claimed, when an officer shot 12-year-old Joey Chlopek the afternoon of June 6, 1992.

"I’ll never believe what the cops said about that day. My boy was jumping over the fence" when he was shot, said Fahrforth, 60.

It was nearly three decades ago, but she lives with it every day, surprised it didn’t prompt her to take her own life. 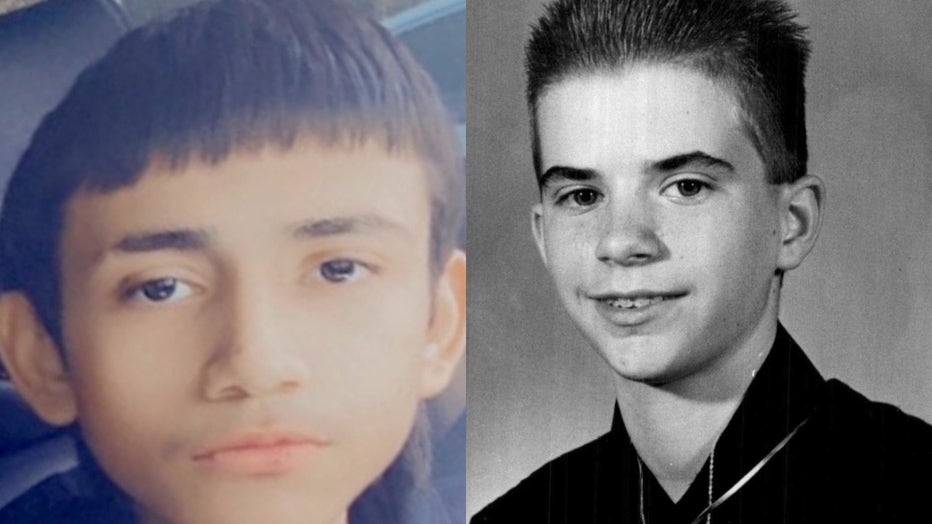 Police said Joey was shot after he pointed a .22-caliber pistol at a plainclothes officer, David Jarmusz, during a foot chase. Joey was shot three times in an alley and collapsed in a backyard in the 3000 block of West 38th Street.

Other than Jarmusz, there were no witnesses to the shooting.

That 1992 tragedy shares many parallels with the fatal shooting in March of 13-year-old Adam Toledo, who was also running from an officer, allegedly with a gun in his hand.

Prosecutors said Adam was handed the gun by a 21-year-old man who had fired at a passing car minutes earlier. Officers found Adam and the man in an alley and chased them, with one officer shooting Adam in the chest as the boy turned around by a fence behind Farragut Career Academy High School.

In Joey’s shooting, police said they were searching for an 18-year-old gang member when they allegedly saw Joey trying to hide a gun as he stood with a group playing basketball outside Davis Elementary School, 3014 W. 39th Pl. 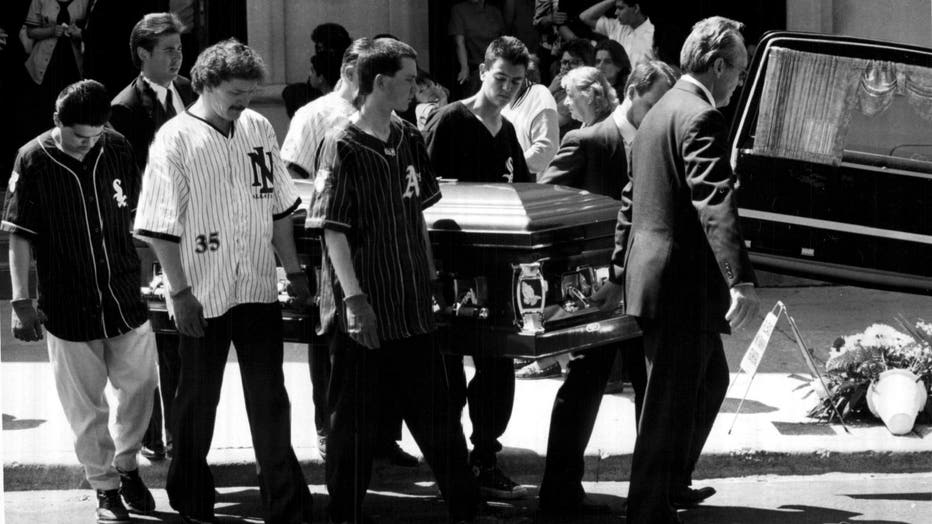 As the officer approached Joey, the child began to run, leading to the chase. Police said the pursuit wound through several alleys into a partially paved gangway. Jarmusz entered the gangway from the front, identified himself and ordered Joey to stop, but the boy pointed the gun at Jarmusz, who opened fired and struck Joey three times, police said.

Chlopek fell dead in a backyard between the front gate and a peach tree. The youth had to hop a fence to get into the yard. Police said Joey’s gun was found in a vegetable garden in the yard.

A 14-year-old boy was later charged with handing the gun to Joey at the school before the chase began.

Fahrforth remains uncertain about what actually happened that day, pointing out that the officer had already shot and wounded two other people at that point in his then-19-year career with Chicago Police Department.

The lack of video in Joey’s shooting is the most striking difference with Adam’s shooting, and a source of Fahrforth’s doubt. "I wish they had a camcorder … I’m still very doubtful" about what happened, she said. 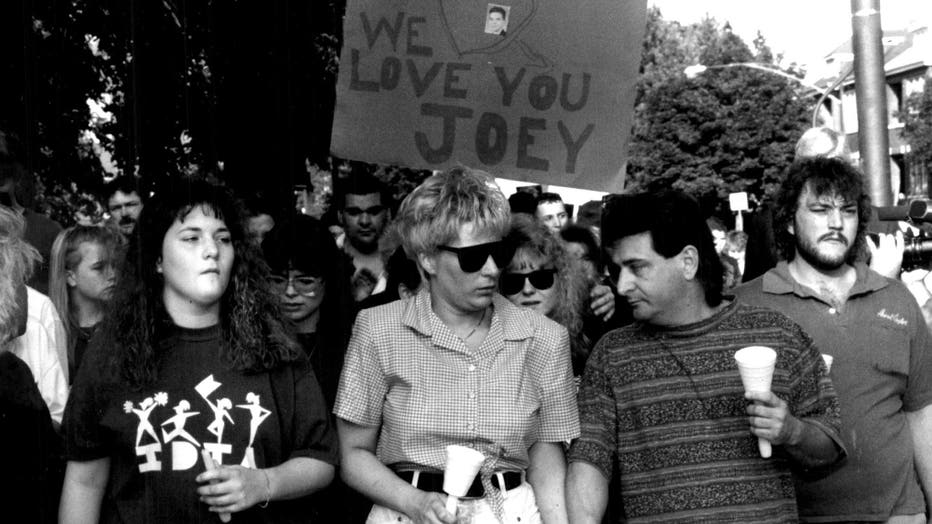 Debra Fahrforth (center) and her husband,Edward, march Monday with other community members through the area on the Southwest side where Debra Fahrforth’s son Joey Chlopek,was shot to death Saturday by a police officer. | Sun-Times file photo

She watched the video of Adam being shot and wonders if that was how her own boy was killed.

"I thought, That’s my son running, not knowing what to do. Scared to stop, scared to run. And the results are, he’s gone," she said. "I feel so bad for that family. It does remind me of Joey running out of the park. It really does."

‘If there was a video, we would’ve won’

Fahrforth filed a federal lawsuit against the officer and the city, claiming Joey couldn’t have had a gun when he was shot. A federal judge ruled in favor of the city and the officer in 1995, but the suit details the doubts Joey’s family had about the police version of events.

The suit claimed Joey couldn’t have been holding a gun because police described him as having it in his right hand, despite the boy being left-handed. The suit also claimed Joey couldn’t have been pointing the gun at the officer because an autopsy showed the three bullets entered Joey’s side. There were also no fingerprints on the gun that matched Joey’s, but police said this was fairly common, and that about half of recovered guns didn’t have usable prints. 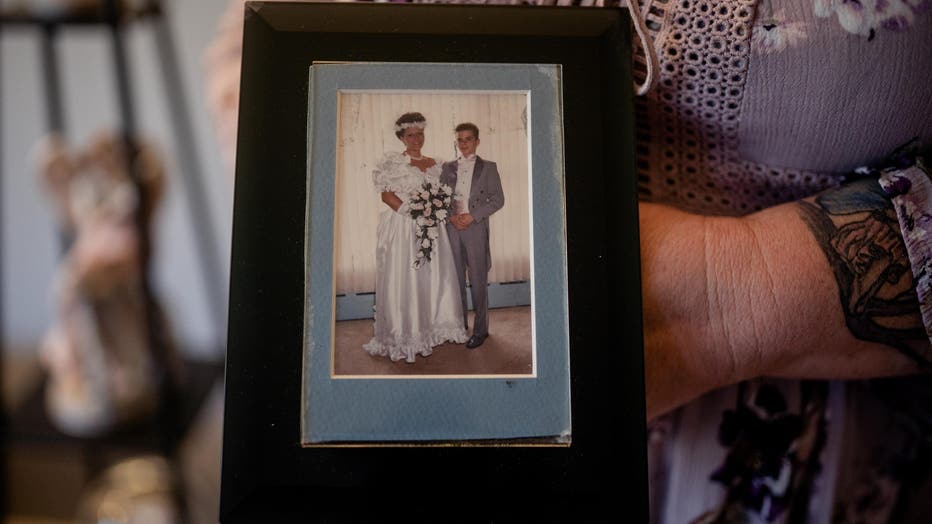 Debra Fahrforth, the mother of 12-year-old Joey Chlopek who was shot by a Chicago police officer in 1992, poses with a photo of her and her son in her home in Willow Springs, Ill., Friday morning, April 16, 2021. | Pat Nabong/Sun-Times

Fahrforth maintains the officer planted the gun on Joey, who she said was actually running home and had a key in his hand when he was shot. She believes video of the incident would have vindicated her and her son.

"If there was a video, we would’ve won," she said.

The officer didn’t reply to a phone message seeking comment.

‘I feel for this mother’

Looking back, Fahrforth thinks Joey was portrayed unfairly by the media, which she said exaggerated parts of the story and painted him as a bad kid.

Media reports said Joey had a gang tattoo on the inside of one of his fingers, which police pointed to as proof he was in a gang. Family and friends disputed the meaning of the tattoo.

Fahrforth said she didn’t know about her son’s alleged gang connection and said relatives hid it from her. She said she did her best to supervise Joey but was working two jobs.

"It’s something taken from you that you think you would never have to go through. Do I think anything’s changed? No, I think it’s even worse today. I think there’s more trigger-happy officers out there," she said. 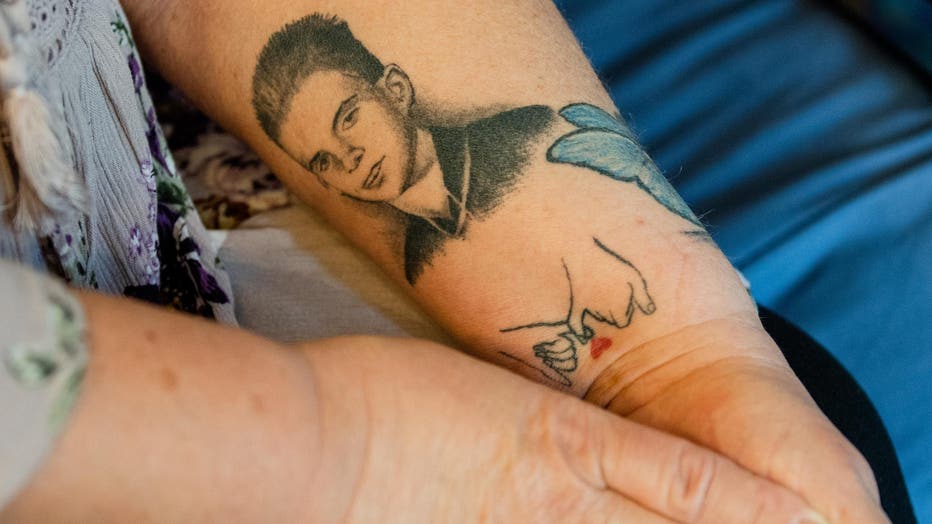 Debra Fahrforth, the mother of 12-year-old Joey Chlopek who was shot by a Chicago police officer in 1992, shows a tattoo of her son in her home in Willow Springs, Ill., Friday morning, April 16, 2021. | Pat Nabong/Sun-Times

Fahrforth said she asked for police protection at her house during Joey’s wake, but police wouldn’t provide it. "We were treated like garbage," she said. "You know I’m still bitter with the police department.

"I know all the money in the world couldn’t bring my son back," she continued. "No mother can get over this. You never get over it; you learn to live with it. I know God says to forgive, but the only thing it makes me do is accept death now."

Fahrforth said the death of her son was "the hardest thing" in her life.

"I’m surprised I didn’t commit suicide, to tell you the truth. When he died, I died. Part of me went with him," she said. "I have to live with this every day. Does this officer have to live with it? He’s taking his pension right now."

"There’s three answers, and only one right one," Fahrforth said. "There’s [the officer’s] story, and my thoughts, and then there’s God that knows what happened."