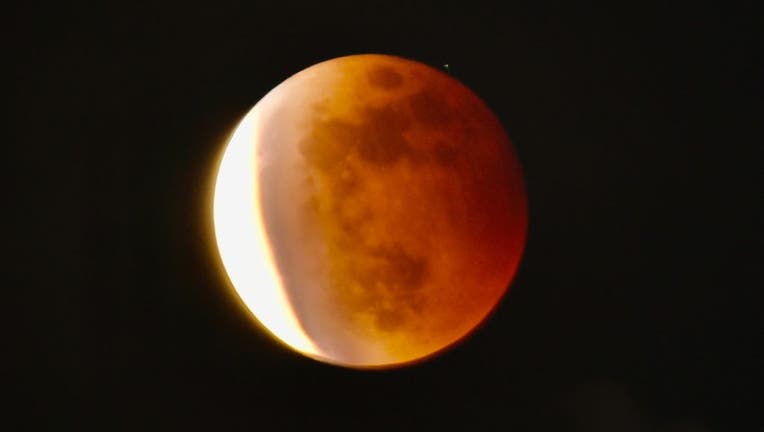 A full blood moon is seen during a partial eclipse in Taipei on May 26, 2021 as stargazers across the Pacific are casting their eyes skyward to witness a rare "Super Blood Moon." (Photo by SAM YEH/AFP via Getty Images)

CHICAGO - Chicagoans will have a front row seat to an amazing lunar spectacle this month.

In the early hours of Friday, November 19, a partial lunar eclipse will be visible. The Adler Planetarium said that during a lunar eclipse, the Earth comes between the Sun and the Moon, blocking sunlight from hitting the moon. The moon will appear to be in shadow. During the eclipse on Nov. 19, 97% of the moon will be in shadow.

The eclipse will be visible to Chicago-area residents from 1:18 a.m. to 4:47 a.m. Central time that day.

The Adler Planetarium will host a special version of of its YouTube show "Sky Observers Hangout" starting at 1:30 a.m. that Friday morning with Director of Public Observing Michelle Nichols and Astronomy Educator Adriana Guzman Diaz as hosts.

The stars came out in the middle of the day, zoo animals ran in agitated circles, crickets chirped, birds fell silent and a chilly darkness settled upon the land Monday as the U.S. witnessed its first full-blown, coast-to-coast solar eclipse since World War I.