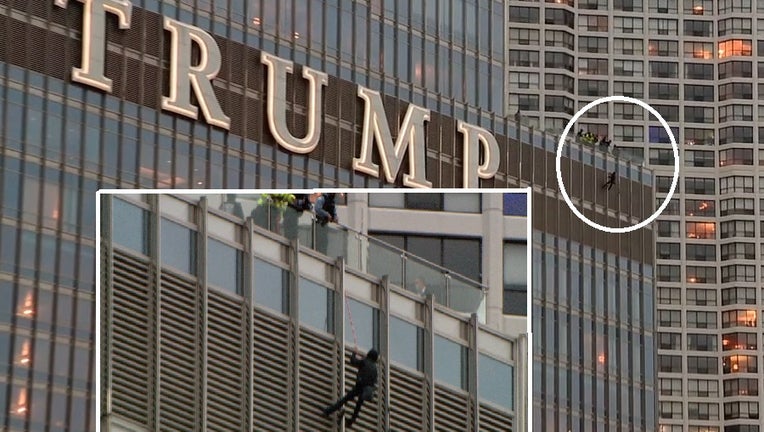 CHICAGO - The man who dangled from the 16th-floor balcony of Trump Tower for over 13 hours last weekend said he was with Black Lives Matter and spoke to a negotiator through a Russian translator, newly released records show.

The man, 31, checked into a hotel room at Trump Tower, then walked up the 16th-floor patio bar, where he tied himself to the railing using a harness and climbed over the edge, according to a police report obtained by the Chicago Sun-Times.

Hotel staff called police and told responding officers that the man was dangling from the side of the building, bringing the SWAT team and a negotiator to the scene, the report shows.

Over the more than 13 hours, the negotiator spoke to the man through a Russian translator, as the man, who said he was “with the Black Lives Matter group,” threatened to cut the rope unless he could speak to the media, the report shows. Chicago police spokesman Tom Ahern said at the time that the man was demanding to speak to President Donald Trump.

The man agreed to be pulled up to the patio after the lengthy discussion with the negotiator, the report shows.

He was taken to Northwestern Memorial Hospital for a mental evaluation following the incident, and police said Tuesday that he would not face any charges for hanging off the side of Trump Tower.

However, the man escaped from a private ambulance Tuesday as he was being transferred to another medical center. He was found safely hours later.

Police said Wednesday that no charges were pending.