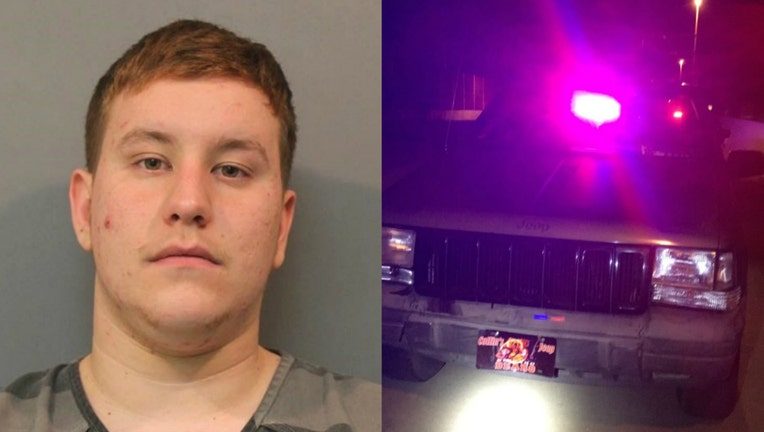 INDIANA - A 21-year-old man charged in northwest Indiana with impersonating a police officer allegedly told police he always wanted to be a cop since he was a junior cadet in Illinois.

About 10:20 p.m. Sunday, a state trooper saw a Jeep speeding at 90 mph down an expressway with red and blue emergency lights flashing, Indiana State Police said in a statement.

They were both traveling west on I-80/94 at Burr Street near Gary.

The trooper noticed the Jeep driving recklessly and causing other motorists to yield, state police said.

The trooper ran the Jeep’s plates and found that it wasn’t a police vehicle, state police said.

As the trooper drove along side the Jeep, “he observed the driver frantically trying to unplug the flashing lights from the power outlet,” state police said.

Collin J. Hamlin, of Lansing, was arrested and charged in Lake County with a felony count of impersonating a police officer, according to police and county records.

State police said he “had always wanted to be a cop since he had been a junior cadet with a police department in Illinois.”

Hamlin was also charged with a misdemeanor count of reckless driving, and was cited for using emergency lights on a private vehicle, unsafe lane movement and following too closely.

A Lake County judge set his bail at $10,000, according to county records.