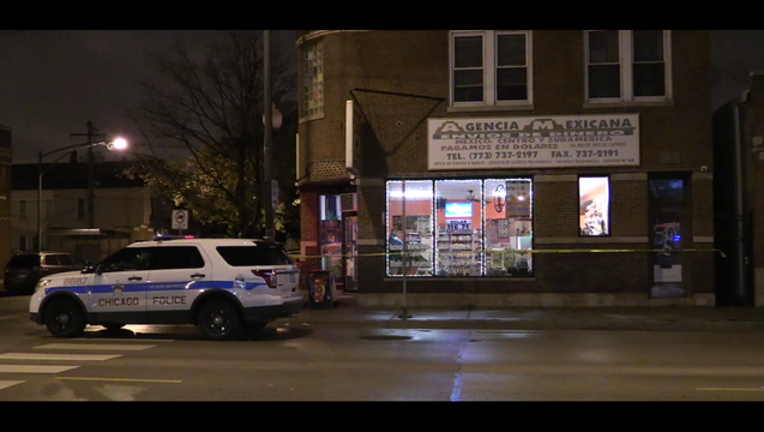 A man was fatally shot after he attempted to rob a Gage Park business Saturday night. | Network Video Productions, Inc

CHICAGO (STMW) - Two men were killed and at least 28 other people — including a 10-year-old boy — were wounded in shootings across the city over Halloween weekend.

The most recent fatal shooting happened Sunday morning in the Little Village neighborhood on the Southwest Side.

Eric T. Jones, 23, was shot in the chest in the 4100 block of West 31st Street at 8:35 a.m., according to Chicago Police and the Cook County medical examiner’s office.

He was taken to Mount Sinai Hospital, where he was pronounced dead at 11:33 a.m., authorities said.  Jones lived in the 0-100 block of Hickory Trace Drive in Justice, according to the medical examiner’s office.

The other fatal shooting happened Saturday night during an attempted armed robbery in the in the Gage Park neighborhood on the Southwest Side, according to Chicago Police.

A man walked into a business that included a currency exchange in the 7200 block of West 51st Street about 7 p.m. and pulled out a gun, threatened the employee behind the counter and announced a robbery, Chicago Police Department spokesman Anthony Guglielmi said.

A customer in the store withdrew his own weapon and fired at the suspect, Guglielmi said. Other customers were in the business at the time, but authorities could not immediately say how many.

Reginald Gildersleeve, 55, of the 5000 block of South California, was shot multiple times and pronounced dead at the scene at 7:10 p.m., according to police and the Cook County medical examiner’s office.

Guglielmi said Gildersleeve had an extensive criminal history, including prior arrests for robbery.

The citizen who shot Gildersleeve has a concealed carry permit and a FOID card, Guglielmi said. Area Central detectives are wrapping up the investigation and charges “do not appear likely,” according to a statement from Chicago police.

The most recent non-fatal shooting happened early Monday in the Humboldt Park neighborhood on the West Side.

A 23-year-old woman was standing in front of her boyfriend’s car at 1:05 a.m. in the 1400 block of West Lawndale Avenue when a male approached and opened fire, Chicago Police said. She was shot in the leg and boyfriend took her to Norwegian American Hospital where her condition was stabilized. She was then transferred to Stroger Hospital, police said.

Sunday night, a 26-year-old man was shot in a West Side Austin neighborhood.

He man was outside in the 5400 block of West Van Buren Street at 8:50 p.m. when a vehicle approached him. Someone exited the vehicle, and fired multiple shots at the man, then the shooter got back in the vehicle and drove away eastbound, police said. The man suffered gunshot wounds to both thighs, and took himself to Loretto Hospital, where his condition was stabilized. He was later transferred to Stroger Hospital, police said.

About 90 minutes earlier, a man was wounded in a Auburn Gresham neighborhood drive-by shooting on the South Side.

The 19-year-old man was on the sidewalk in the 8700 block of South Honore Street at 7:11 p.m. when a car drove by and someone inside fired shots before leaving the area. The man heard the shots and felt pain, police said. He suffered a gunshot wound to the left leg, and was taken to Holy Cross Hospital in good condition, police said.

Three hours earlier, a man was shot in the South Side Bronzeville neighborhood.

The 23-year-old man was outside in the backyard of a home in the 4900 block of South Champlain Avenue about 4:15 p.m. when he heard shots and felt pain, police said. He suffered a gunshot wound to the back, and took himself to Provident Hospital of Cook County where his condition was stabilized.

Earlier in the day, the 10-year-old boy was among four people injured in three separate Greater Grand Crossing neighborhood shootings on the South Side.

The boy was shot at 2:35 p.m. when a man on a bicycle opened fire at a group of men in the 7600 block of South Parnell, police said. The shooter then ran away. The boy suffered a gunshot wound to the leg and was taken to Comer Children’s Hospital in good condition, police said.

At 12:35 p.m., a 23-year-old man was in an alley in the 5000 block of South Princeton when three males walked up and one pulled out a gun, police said. The gunman fired in his direction before running away. The man was shot in the right side of the torso and taken in good condition to Stroger Hospital. A police source said the victim is a documented gang member.

About two hours earlier, two 16-year-old boys were shot in a third Greater Grand Crossing neighborhood shooting. The boys were shot in the 7300 block of South Woodlawn Avenue at 10:47 a.m., when they were approached by a group of people. One person from the group shot at the boys, and then the group ran away, police said. One of the boys suffered a gunshot wound to the leg, and was taken to Advocate Christ Medical Center in Oak Lawn where his condition was stabilized. The other boy, who is a gang member, suffered a graze wound to the leg, and he refused medical attention at the scene.

At least 20 other people were wounded in Chicago shootings between 5:40 pm. Friday and 1:05 a.m. Monday.