Two Chicago men have been charged in the fatal shooting of a 12-year-old girl who was struck by a bullet while out celebrating her birthday with family in March, police officials announced Tuesday.

CHICAGO - Two Chicago men have been charged with fatally shooting a 12-year-old girl in March as she was heading home from her birthday party in West Englewood, police officials announced Tuesday.

Nyzireya Moore was riding in a Buick SUV with her family on March 1 when a group began shooting at another car driven by a rival gang member in the 2300 block of West 72nd Street, about a block from where she lived, Chicago police said.

Moore was struck in the head by a stray bullet and taken to Comer Children’s Hospital, where she died three days later, police said.

Malik Parish, 22, and Abdul Ali, 20, were each charged with one count of first-degree murder, Chicago police Supt. David Brown announced at a press conference Tuesday. Both men were in possession of a stolen Ford Mustang when they were taken into custody on Sunday, according to Brown.

Brown said a third suspect involved in the shooting is still at large.

Chicago police share video of suspects in murder of 12-year-old Nyzireya Moore, killed on her birthday

Chicago police have shared new video of the suspects in the murder of Nyzireya Moore, who had just celebrated her 12th birthday with family. Moore was riding in the backseat of the family's car when gunshots rang out on West 72nd near South Oakley in Chicago Lawn on March 1.

Moments before the shooting, the three gunmen were recorded by surveillance cameras leaving a house in the 2300 block of West 72nd and walking to the corner, where they saw a rival gang member drive by in the Mercedes, prosecutors said.

The three waited about two minutes and allegedly began shooting at the car as it drove north.

Moore’s mother was driving the Buick and was about a block from home when she heard gunshots and glass shattering, then realized her daughter had been shot, authorities said.

Two people who saw the shooting couldn’t identify the shooters, who were all wearing hooded sweatshirts. But two other witnesses were able to identify Parish from images taken from surveillance recordings, prosecutors said.

At a news conference Tuesday, Chief of Detectives Brendan Deenihan said a break in the case came when an anonymous witness came forward, calling it "a pivotal point" in the investigation.

During the chase, officers saw an extended magazine protruding from Ali’s front waistband and later recovered a 9mm Glock handgun equipped with a laser sight and automatic switch along the path he used to try and escape, prosecutors said.

Parish was allegedly found with a key fob for the Ford in his pocket.

A third man arrested with Ali and Parish on Sunday, 22-year-old Darius Turner, was seen throwing a handgun with an automatic switch before he was taken into custody, prosecutors said. He was charged with a felony count of armed habitual criminal.

Neither of the guns recovered were used in the March 1 shooting, prosecutors said, citing preliminary tests.

Community activist Andrew Holmes, who has worked with the family, said they were grateful for the arrests but added "there’s not too much relief there."

Police Supt. David Brown used Tuesday’s news conference to once again criticize judges and prosecutor, who he claimed are too lenient in allowing violent criminals to be released from custody.

"These are violent people and their criminal history has shown them to be violent," Brown said. "We need to throw the book at these people." 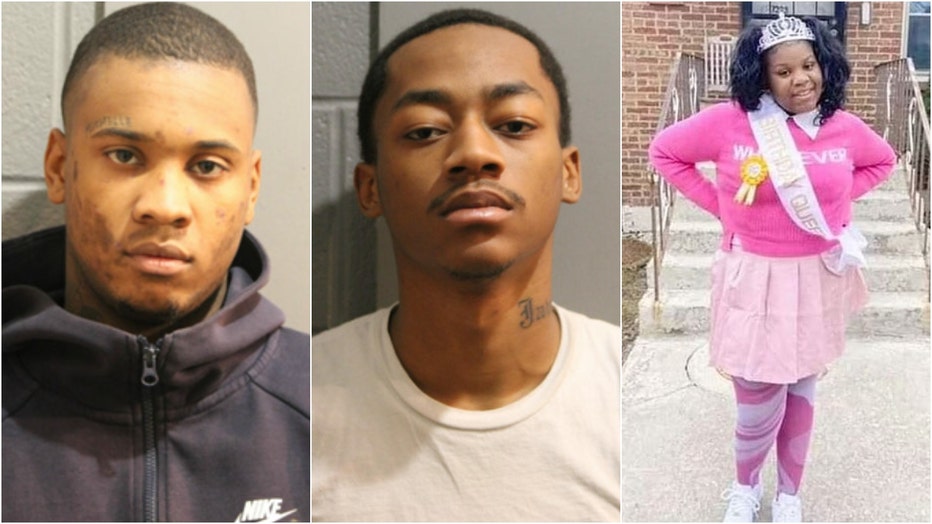 But court records show neither man charged in Moore’s killing has convictions for serious violent offenses.

Parish was charged in September with aggravated assault with a deadly weapon after allegedly showing a gun in his waistband and threatening a man he was arguing with. But no weapon was recovered by police when he was arrested and the charge was dropped on Monday.

Ali has no convictions but is facing a separate case for allegedly possessing a gun with a defaced serial number and not having a firearm owners identification card. That case was filed nearly three months after Moore was killed, records show.

Shortly after the shooting, Brown vowed to use the "full brunt of every resource we have" to catch the killer.

"This was heinous, reckless, senseless and the gangs involved — and you know who you are— we’re coming after you," Brown said.

The shooting occurred in CPD’s 8th District, which has seen a 29% increase in shootings this year compared to the same time last year, according to police data. Overall, crime is up 54% in the district, including more aggravated batteries, robberies, burglaries, thefts and motor vehicle thefts.

At least 33 children 15 and younger have been killed in Chicago this year. Tuesday’s charges come a week after three people were arrested for the murder of 7-year-old Akeem Briscoe.

Akeem was struck by a stray bullet as he washed his hands in his Humboldt Park home last month.