VP Harris in Chicago: Vaccinated can be ‘role models’ for friends, family

Visiting a coronavirus vaccination site on Chicago’s Near South Side Tuesday, Vice President Kamala Harris declared, "we can see a light at the end of the tunnel."

CHICAGO - Vice President Kamala Harris on Tuesday visited a bakery in Chicago, coming away with a piece of German chocolate cake -- even as she faces scrutiny for not having visited the overwhelmed southern border.

Harris was in Chicago, where she toured a vaccination site that opened to union workers. She also visited Brown Sugar Bakery on the city’s South Side, where she met with owners and employees.

According to the pool note, Harris said her favorite is German chocolate and gets it for her birthday each year, and her staff had preordered a slice for her.

The visit comes as the Biden administration is facing a crisis at the southern border, and Harris has been tapped as Biden’s point person to deal with what the White House describes as "root causes" of the crisis.

VP HARRIS IN CHICAGO: VACCINATED CAN BE 'ROLE MODELS' FOR FRIENDS, FAMILY

Biden said last month that Harris has "agreed to lead our diplomatic effort and work with those nations to accept the returnees, and enhance migration enforcement at their borders -- at their borders." 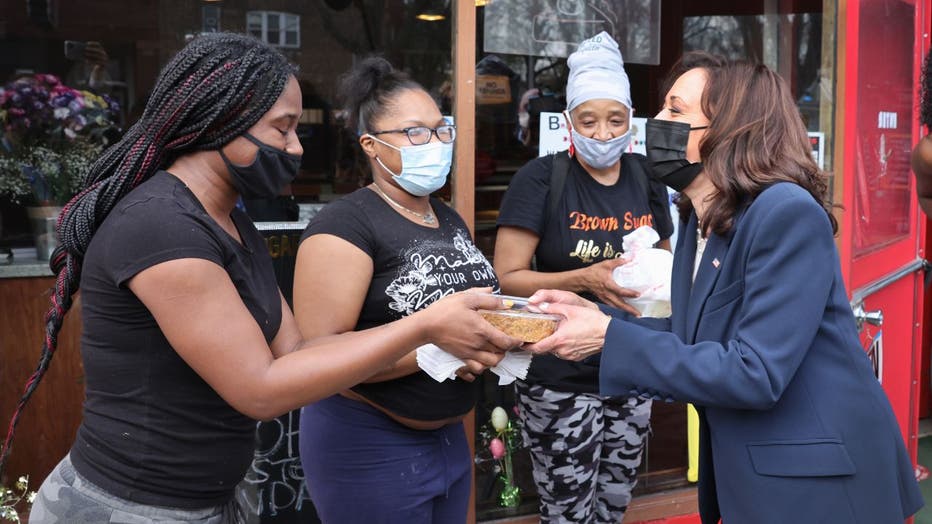 U.S. Vice President Kamala Harris speaks with workers outside of the Brown Sugar Bakery in the Greater Grand Crossing neighborhood during a quick stop on April 06, 2021 in Chicago, Illinois. Vice President Harris also made a stop at a COVID-19 vaccin (Scott Olson/Getty Images / Getty Images)

The White House later clarified that Harris wasn't involved with the "border crisis," but was instead focused on addressing the "root causes -- not the border."

The Biden administration has been facing a continuing border crisis, with a migrant surge that has led to images of migrant children packed at over-capacity facilities and families being released into the U.S.

The administration has refused to call it a "crisis," instead calling it a "challenge" and blaming the Trump administration's dismantling of legal asylum pathways -- while Republicans have blamed Biden's immigration policies.

Before the Chicago trip, Harris was in California on Monday, where she visited small businesses and a water treatment plant as she touted the administration’s latest spending plan, touted as an infrastructure bill. That visit drew criticism from Republicans for ignoring the border, while in a border state.

"It would have been incredibly easy for Harris to add a stop on her trip to show her support and to console, comfort and lead on the ground. She has her own plane," Republican National Committee (RNC) Chair Ronna McDaniel said in an op-ed for Fox News. "The flight time from LA to San Diego is about 30 minutes. "

Earlier this week, Arizona Attorney General Mark Brnovich wrote to Harris, urging her to visit to the border and inviting her on a trip to the area with him.

Meanwhile, Bloomberg News reported that Harris has moved out of Blair House, the president's guest quarters on Pennsylvania Avenue near the White House, and spent her first night at Number One Observatory Circle on Tuesday.

Fox News' Sam Dorman contributed to this report, as well as The Associated Press.