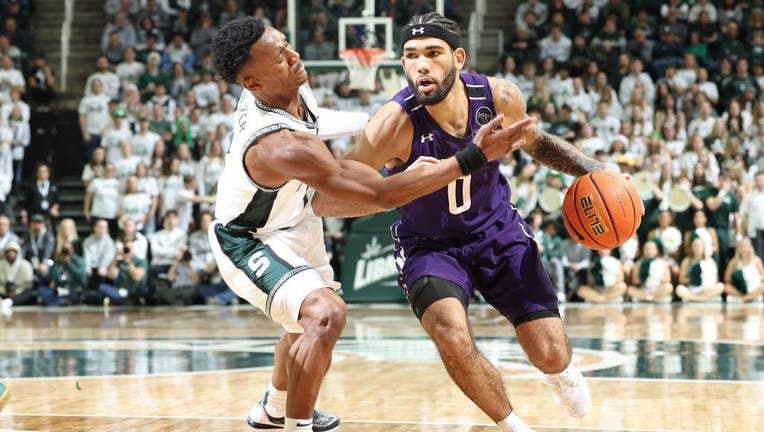 Boo Buie #0 of the Northwestern Wildcats drives past Tyson Walker #2 of the Michigan State Spartans in the second half of the game at Breslin Center on December 4, 2022 in East Lansing, Michigan. (Photo by Rey Del Rio/Getty Images)

Chase Audige added 15 points and Ty Berry had 13 for Northwestern (6-2), which ended a two-game losing streak.

"Needless to say, this was a huge win for us," coach Chris Collins said. "Coming off our performance in the ACC-Big Ten challenge, where we lost badly on our home floor (to Pittsburgh), I was really pleased with our resolve the past couple days."

Mady Sossoko and A.J. Hoggard each had 12 points for Michigan State (5-4) and Joey Hauser added 10. The Spartans have lost two in a row, falling to Notre Dame earlier in the week.

Hoggard cut Northwestern’s lead to 64-63 with 46 seconds left. After a timeout, Buie scored on a layup with 23 seconds left.

Northwestern took the lead late in the first half on a layup by Buie and never relinquished it, leading by as many as nine points.

"We put (the loss to Pittsburgh) under the rug," Buie said. "We turned the page, just like we do with any win or loss. The season is so long you can’t get caught up on one single game. Just like tonight. We’re super happy with the win, but after tonight it’s over. You can’t dwell on things."