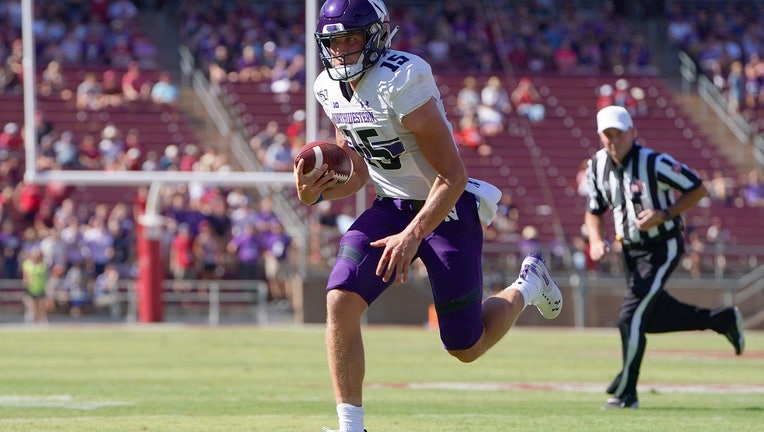 The redshirt sophomore will get his first opportunity on Saturday when the Wildcats (0-1) host UNLV (1-1) in the home opener at Ryan Field.

Johnson was hyped as the best quarterback prospect the program ever has had after transferring from Clemson a year ago, but his debut was underwhelming. He completed just 6 of 17 passes for 55 yards with two interceptions in a 17-7 loss at Stanford two weeks ago.

Fitzgerald chalks that up to a combination of rust and inexperience. It was Johnson's first college start and the first time he had played in a game since mop-up duty for Clemson in a 38-3 rout of Miami in the ACC championship game on Dec. 2, 2017.

"It's like the chicken or the egg, which comes first, confidence or experience?" the coach said. "I would say both. I think you have to be pretty confidence. Sometimes you have to fake it to make it."

Johnson expects to play much better this week.

"Playing that first game, having that under my belt, now it's something I've experienced," he said.

Facing a UNLV team that dropped a 43-17 decision to Arkansas State last week certainly presents less of a challenge than facing a ranked team on the road.

The Rebels are having quarterback issues of their own with starter Armani Rogers coming off a miserable performance against Arkansas State. He completed just 8 of 23 passes for 42 yards with an interception (returned for a touchdown) and six sacks.

Coach Tony Sanchez is sticking with the junior for now.

"Armani's still our guy," Sanchez said. "We have to have a better performance there. When we went back and watched film, we weren't very good. We need to talk about what we need to do to get him comfortable.

"The frustrating thing is we know how good of a quarterback he is because we see it every day in practice, but it's got to translate on Saturday."

If Rogers struggles, don't be surprised if redshirt freshman Kenyon Oblad gets an early call. Oblad came on in relief late against Arkansas State and was 3 for 3 for 70 yards, including a 56-yard TD to Randall Grimes.

It's unusual for a team to have a bye in the second week of the season, but Northwestern decided to schedule things that way because of the long trip to West Coast in the opener.

"It's kind of bittersweet," junior defensive back JR Pace said. "It gives us a chance to rest and recover. Obviously, it's bad having that taste in your mouth and thinking about it for two weeks."

Because the fall semester hasn't started yet, few Northwestern students are likely to attend the game, so the stands figure to be quieter than normal.

"I think we've moved on and I think we know the burden of playing a game when the students aren't on campus yet," defensive lineman Joe Gaziano said. "But to be honest, this next game is more about us than the opponent."

Despite the offensive struggles, the Wildcats defense held Stanford to 10 points until a strip sack of Johnson for a TD in the final minute. Still, the players weren't happy with a host of missed tackles.

"We went through a bunch of tackling drill, simulating different angles on tackles," Pace said.

OUT FOR THE SEASON

Johnson shared time in the opener with TJ Green before the fifth-year senior suffered a foot injury. Green had season-ending surgery last week. Green was 6 for 10 for 62 yards against Stanford.