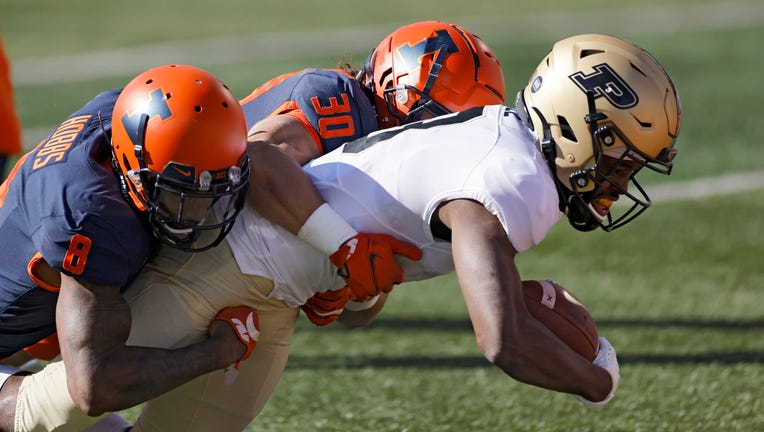 David Bell of the Purdue Boilermakers dives for extra yardage after a reception against the Illinois Fighting Illini in the first quarter of the game at Memorial Stadium on October 31, 2020 in Champaign, Illinois. Purdue defeated Illinois 31-24. (Joe Robbins/Getty Images / Getty Images)

CHAMPAIGN, Ill. - Aiden O’Connell passed for two touchdowns and Purdue hung on to beat a COVID-19-decimated Illinois team that was down to its fourth-string quarterback, 31-24, on Saturday in a game marred by player absences and moments of utter confusion.

Sophomore Coran Taylor found himself at the Illini helm on his team’s second possession, following what appeared to be an ankle injury to last-minute starter Matt Robinson. Taylor threw for two touchdowns and was intercepted twice.

Despite all of its player issues, Illinois (0-2, 0-2 Big Ten) still made a game of it and was within seven points and 15 yards of tying the game with less than two minutes to play. Taylor’s pass fell short and the Boilermakers (2-0, 2-0) took over on downs, sealing the victory.

The game was played without spectators and, for the most part, without updated official statistics available in the press box.

Purdue: Did what it had to and came away with a solid win over a team that wasn’t expected to put up much of a fight, even with its starting roster intact.

Illinois: The game was frightful for the Illini. A rash of COVID-19 positive results and the first-quarter injury to fill-in starter Robinson left Illinois fourth-string QB Taylor, who was lifted for one play in the second half after being sacked. He was replaced for one play by true freshman Deuce Spanner, before limping back onto the field.

Purdue: Scheduled to travel to Wisconsin Nov. 7. It’s not clear whether Wisconsin, whose game with Nebraska was canceled this week, will be cleared to play.

Illinois: Hosts Minnesota, a surprise winner at Maryland on Friday, on Nov. 7. Most of the Illinois players out with COVID-19 are expected to miss that game, as well.

Enter the NFL Challenge contest on the FOX Super 6 app for free and you can win the $1M jackpot! Download now!