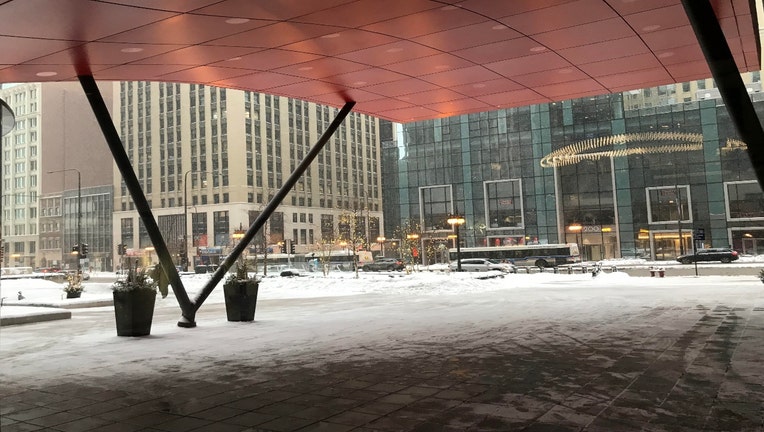 CHICAGO - Timing is everything when it comes to snow and it couldn't have been worse Monday. A new round of powdery snow began to fall late last night and continued through Monday morning's commute.

The picture above is from Michigan Avenue just outside FOX 32 studios Monday morning.

We are starting to catch up on snowfall after a winter that got off to a very slow start. We set the record for the latest date of our first measurable snow when 1.5 inches fell on Dec. 28. We picked up another .4 inches the next day to end December with 1.9 inches of snow which was 5.7 inches below average.

So far this January, 8.4 inches of snow has fallen (not including Monday's system) which is .3 inches above average. Since Dec. 1, we have seen 10.3 inches of snow, which is 5.4 inches below average. I am expecting around 2 inches of snow at O'Hare on Monday with another inch or two possible late Thursday into Friday.

That would mean we could cut the snowfall deficit down to just a couple of inches below average by the end of the week. 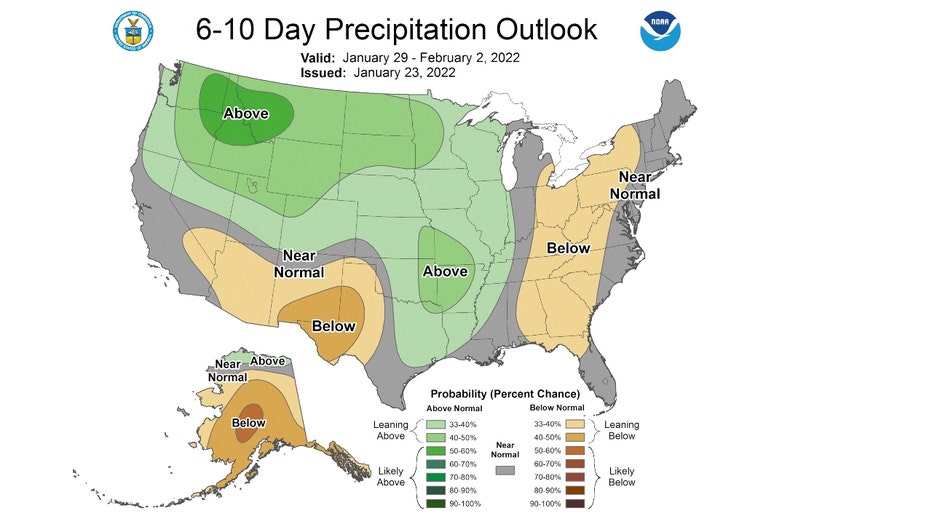 Models are hinting at a more active period coming for the end of January through the first week of February. The 6-10 day precipitation outlook is "leaning above" average for precipitation from Jan. 29 through Feb. 2 (this Saturday through the following Wednesday).

The 8-14 day outlook is also "leaning above" average for precipitation too. It covers the period from the last day of January through the first six days of February. 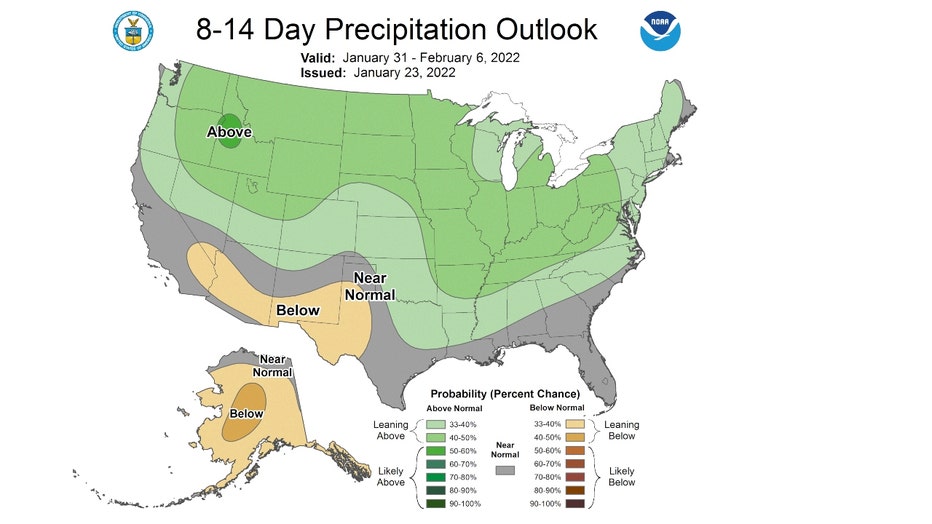 These forecasts are for precipitation, which could be in the form of rain or snow and even something in-between. The long-range daily high and low forecast from the National Blend of Models show highs warming above freezing for the middle of next week. So not all of the precipitation coming over the next ten days or so will necessarily be snow but most of it should be, according to the temperatures in this forecast. 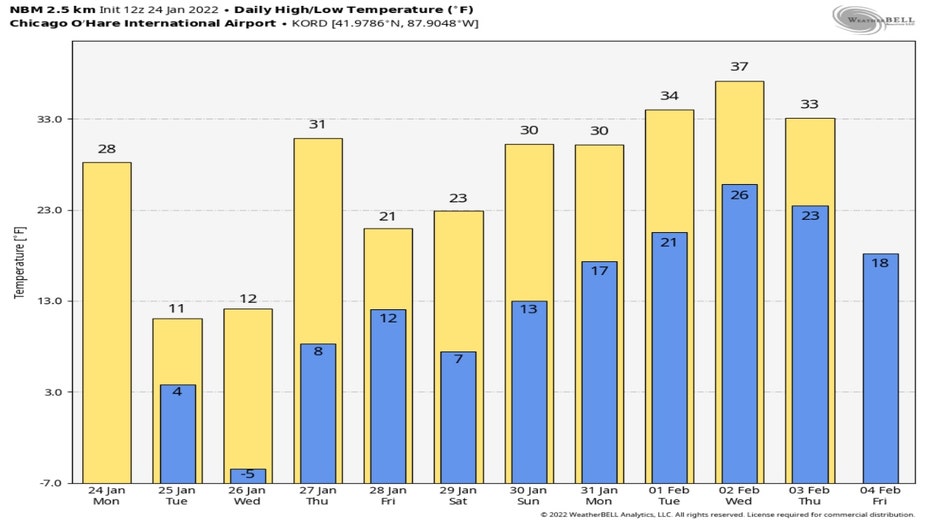 I ran out two models through this weekend (not including Monday's snow) to get an idea of the total snowfall accumulation expected. The GFS or "American Model" is squeezing out between 1 inch to 2 inches of snow for most of us. Most of this snow would fall Thursday night into early Friday. Lake effect snowfall brings the totals higher in northern Indiana where up to nearly 7 inches of snow is forecast. 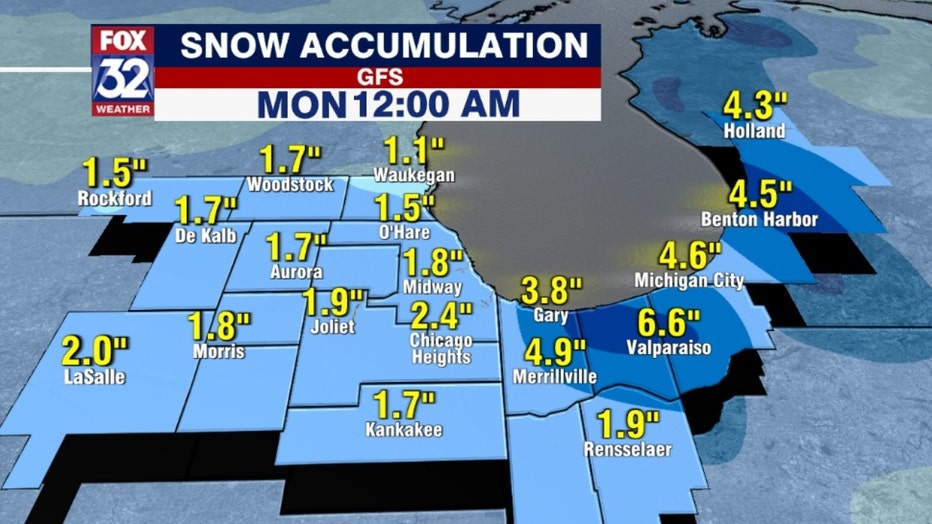 The ECMWF or "European Model" squeezes out about a half inch to an inch and a half for most of northern Illinois with up to nearly 4 inches in north central Indiana. 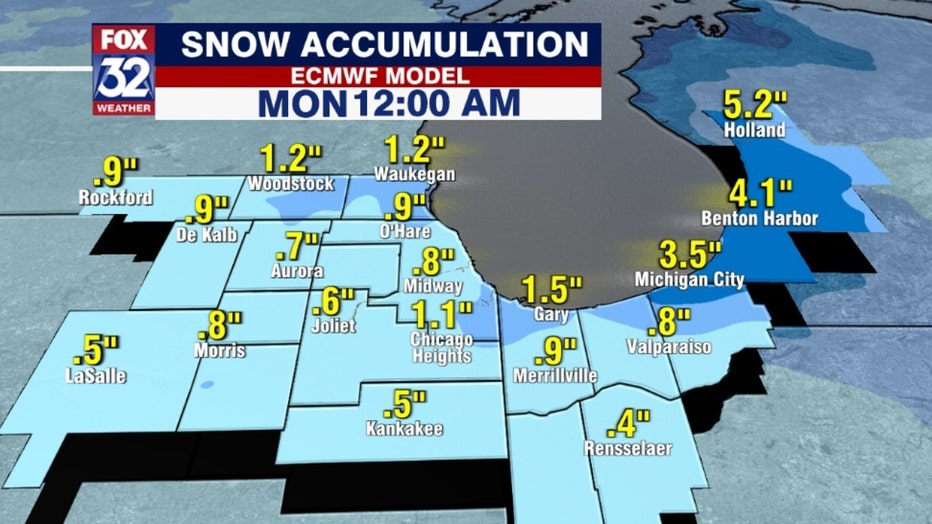 So after a slow start to our snow season, we could be catching up to about average by the time we get through the first week of February.