Chicago - If you are having a hard time dealing with the thought of more snow, let me share some good news to dwell on instead.

Daylight Saving Time begins in a little more than two weeks. The sun will set at 6:54 p.m. on March 13. We have gained two hours and three seconds of daylight since the winter solstice on Dec. 21. By the spring equinox on March 20, we will have gained three hours and eleven minutes of daylight.

Last but not least, meteorological spring is now just four days away!

I've been posting about this week's snow system (or should we call it a storm?) all week. It's a long way from a snowpocalype or snowmaggedon type of storm, but it will have impacts on Thursday night's commute and Friday morning's too.

Let's look at the GEFS model ensemble. An ensemble is an excellent way to get a handle on what the models are thinking. Here is the National Weather Service explanation of how the Global Ensemble Forecast System works:

The Global Ensemble Forecast System (GEFS) is a weather forecast model made up of 21 separate forecasts, or ensemble members. The National Centers for Environmental Prediction (NCEP) started the GEFS to address the nature of uncertainty in weather observations, which are used to initialize weather forecast models. 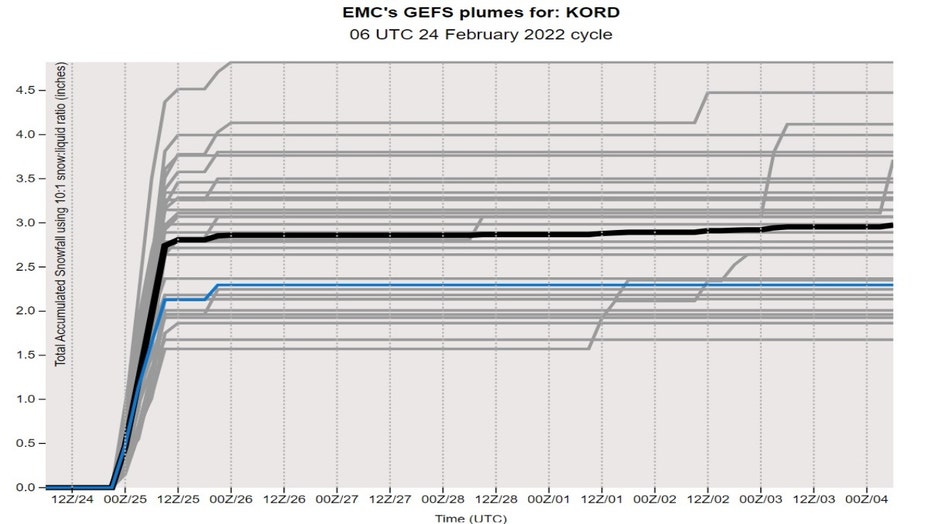 The ensemble has a range of solutions for the snowfall starting late Thursday and lasting into the morning hours on Friday. The main system will bring most of the snow between 6 p.m. Thursday and through just past midnight.

Lake-effect snow will continue into the morning hours on Friday for some of us. The GEFS ensemble spits out a range of snowfall for O'Hare from as little as 1.5 inches to as much as nearly 5 inches. Most of the ensemble members are between 2 and 3.5 inches. 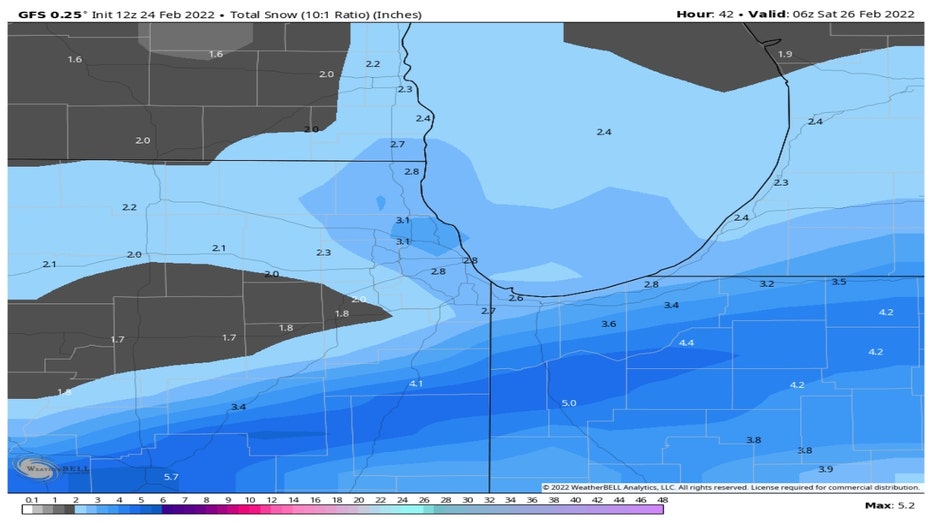 Now let's look at some individual model runs. The GFS model suggests around 2 inches to a bit over 3 inches for most of us. The higher amounts south of I-80 are from the system's snow. The bump in totals in the city and surrounding areas are probably from lake-effect enhancement and lingering lake-effect snow Friday. 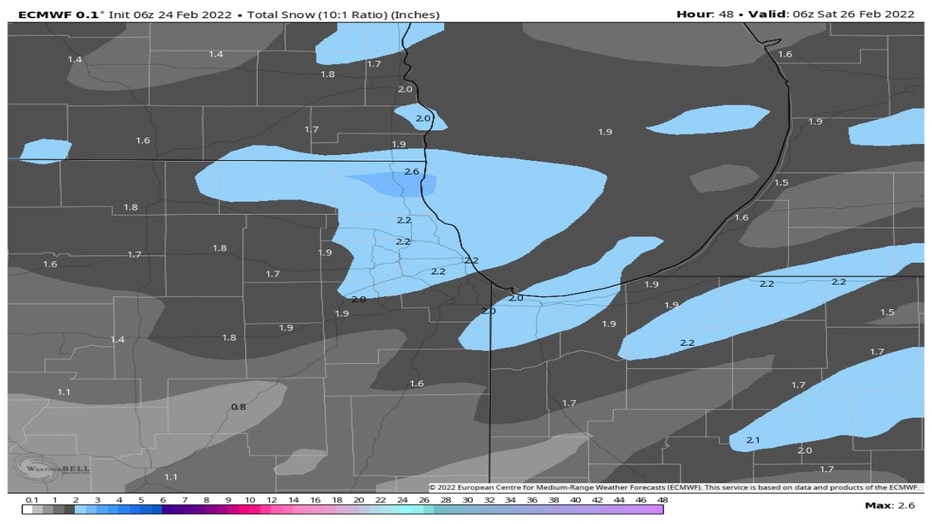 The European model is calling for around 2 inches to just under 3 inches for northern Illinois and Indiana. 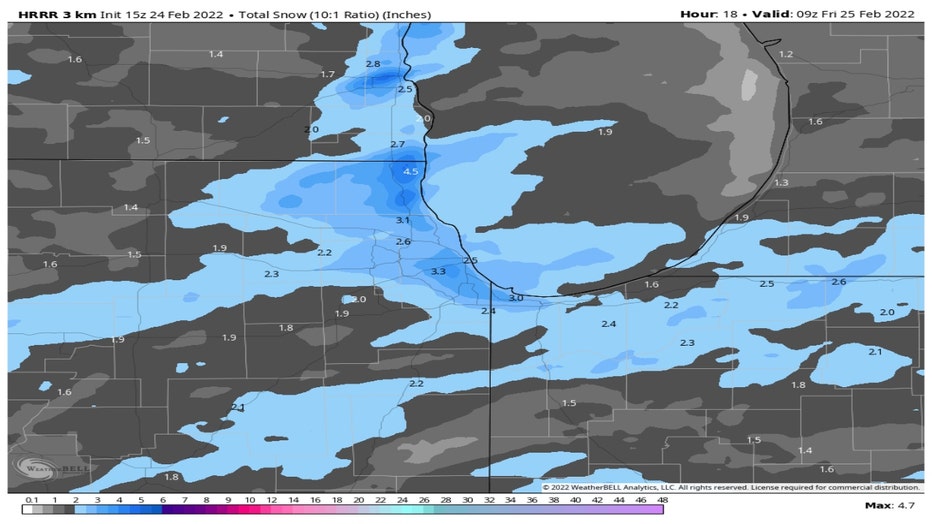 The HRRR model is squeezing out the most snowfall. It suggests most of the area will pick up around 2 to 5 inches. The higher amounts closer to Lake Michigan reflect lake-effect enhancement.

I am leaning more towards the HRRR model. I think most of us will see 2 to 4 inches with a few spots possibly seeing some 5 inch totals. The higher amount of that range (4 to 5 inches) will be in counties adjacent to the lakefront, like Cook County and Lake County in Illinois. Chicago itself should see between 4 to 5 inches in total. 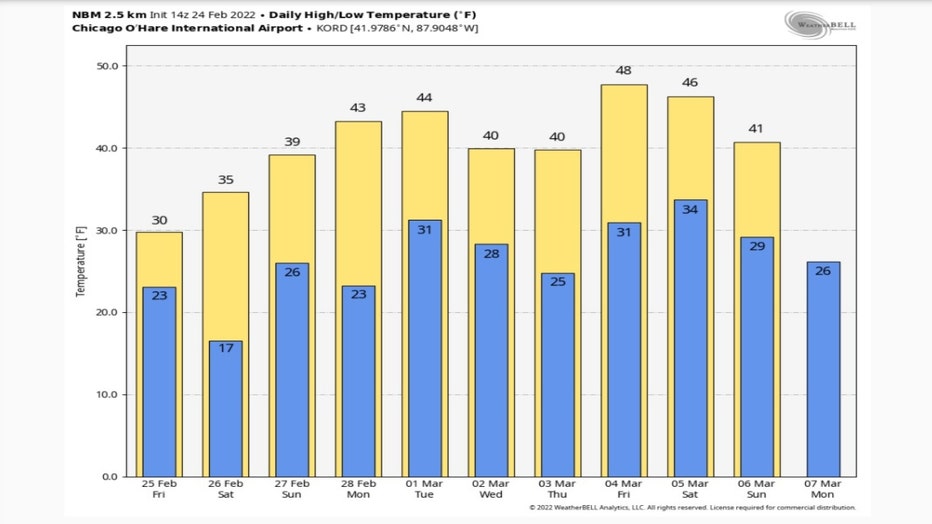 More good news for those who aren't fans of snow and/or winter in general. The National Blend Of Models continues to forecast several days with highs in the 40s starting next Monday and continuing right through the following weekend.

So any snow that falls Thursday and Friday won't last long and there won't be additional snow at least through the first week of March.