The Chicago area has been dealing with some rough weather since Sunday.

EVANSTON, Ill. - Nearly 20,000 people were without power and over 100 flights were canceled Monday as storms whipped up strong winds and dumped more than two inches of rain in Chicago, which has seen a relatively dry season so far.

By mid-morning, more than 19,000 homes were without power, ComEd spokeswoman Luz Bottecchia said. Since the storms began Sunday, more than 89,000 ComEd customers have lost power. Power had been restored to 81% of them by noon Monday. Outages in Chicago peaked earlier with 33,000 people without power.

The brunt of the storms hit mid-morning with peak gusts of 45 mph at O’Hare Airport and 48 mph Midway, according to the National Weather Service. More than 2 inches of rain fell in Chicago while some west and southwest suburbs reported over 3 and 4 inches.

A large tree crashed down on Judson Avenue in Evanston, damaging parked cars, a light post, and leaving branches blocking the street. The tree fell due to high winds and heavy rains, sometime in the night when residents were safe inside their homes.

Steven Hannah, owner of a black Jeep, said Evanston police awoke him to inform him that a tree had hit his vehicle.

He inspected the damage to the rear of the vehicle and said he was glad it wasn’t worse. He described it as another curve thrown his way after a hard year and a half.

Evanston crews cut the tree in smaller pieces and moved it off the roadway. 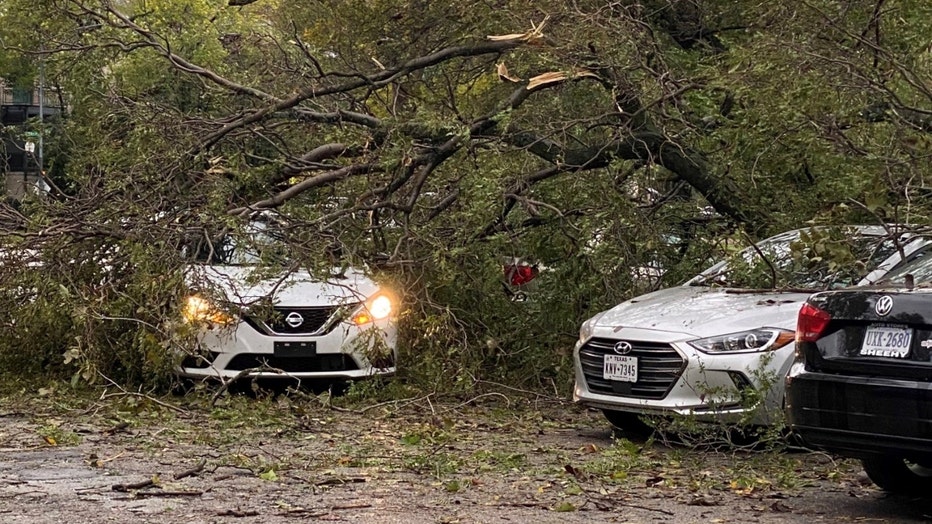 Storms battered the state, especially downstate near Bloomington where hail, lightning and flash floods were reported.

Despite the sustained period of rain, the Chicago area has been relatively dry this season, measuring 7 inches below the annual average rainfall by late October: around 32 inches, according to National Weather Service meteorologist Kevin Birk.

"We had a pretty active period (of snow) in February, but we’ve had a pretty dry period after that — spring into summer — and we’ve built up these precipitation deficits," Birk said. "Most of Chicago has been pretty dry."

The weather service has issued a lakeshore flood advisory until 7 p.m. Monday. It warns of waves between 12 to 16 feet high. Lakeshore paths were closed Fullerton to Ohio St., and from 47th to 51st streets due to high waves, according to the city officials. The underpasses at Oak Street, Chicago Avenue and Division Street were also blocked.

A wind advisory expires 3 p.m. in Chicago, according to the weather service.

The wind and rain was expected to ebb by Monday afternoon and evening, Birk said. Tuesday and Wednesday should be dry, before another round of rain hits Thursday, he said.