Residents of Chicago and NW Indiana are being urged to avoid the lakefront as a dangerous combination of gusts and large waves pummels the shores of Lake Michigan.

CHICAGO - Residents of the Windy City are being urged to avoid the lakefront as a dangerous combination of gusts and large waves pummels the shores of Lake Michigan.

A lakeshore flood advisory ends at 6 a.m. Tuesday, and the worst conditions are expected during the day Monday, according to the National Weather Service.

Wind gusts up to 50 mph and waves up to 14 feet high will likely flood the shores of central and northern Cook County.

“Large waves combined with high lake levels will lead to minor flooding of parking lots, parks, and paths, along the immediate lakeshore,” the weather service said in its advisory.

“Additionally, a one foot increase in the water levels is possible along river mouths, canals, and ports along Lake Michigan. Stay dry when waves are high!” the weather service said.

Conditions will be even worse in northwestern Indiana, which is expected to face the wind gusts head on and see waves up to 17 feet high, the weather service said.

GET FOX 32 WEATHER BY CLICKING HERE

The weather service was predicting up to 5 inches of lake effect snow to cover parts of northwest Indiana by Monday night. 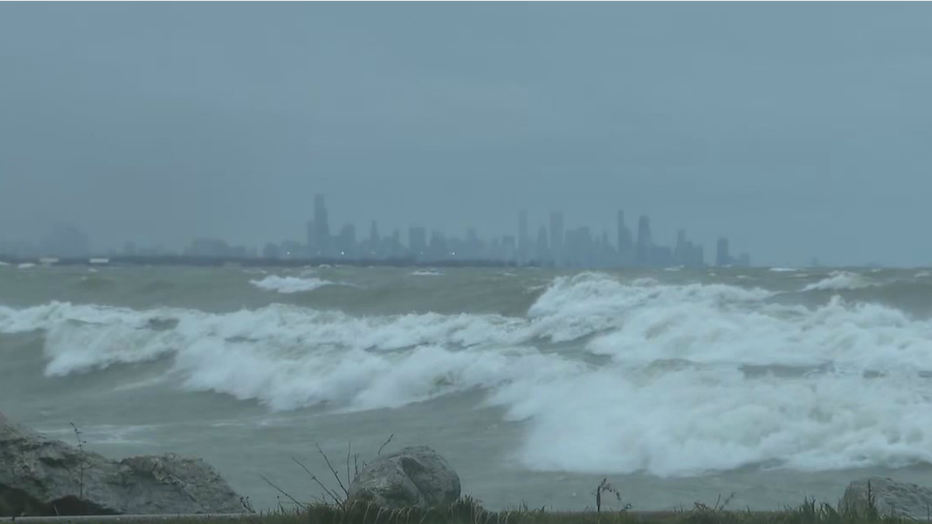 Areas as far north as Waukegan could also see some accumulation, including downtown Chicago, the weather service said.