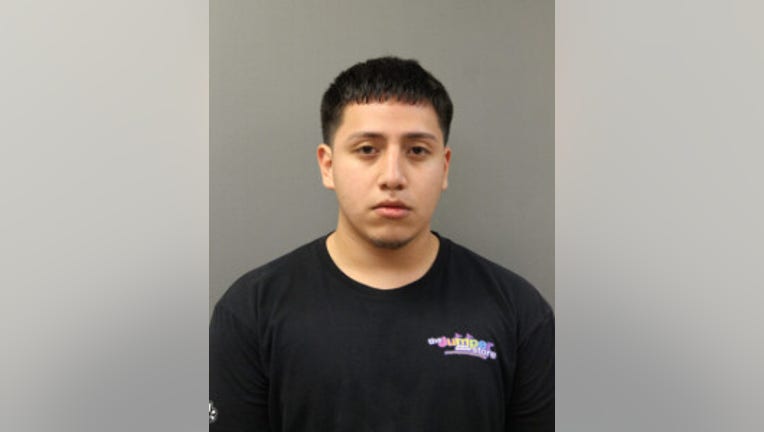 CHICAGO - A man accused of fatally shooting a man last week in Logan Square and wounding the victim’s family member was ordered held without bail Sunday by a Cook County judge.

Alexander Santander, 18, approached the pair shortly before noon as they walked in the 2500 block of North Maplewood Avenue and asked “What’s up?” before taking out a gun and firing three shots, Cook County prosecutors said.

The gunfire hit Jeremiah Nieves, 22, in his chest, fatally wounding him, prosecutors said.

Nieves’ aunt was shot in her ankle, prosecutors said. She was listed in good condition, police said.

Santander ran away, discarding his Blackhawks hooded sweatshirt, and drove off in a waiting Ford hatchback, prosecutors said. But authorities were able to track the vehicle by its license plate and identify him through security video.

About 12 minutes before the shooting, Santander was captured on surveillance video at a nearby Target exiting the same hatchback wearing the same Blackhawks hooded sweatshirt, prosecutors said. The driver of the car has not been charged.

Santander, who has no criminal history, worked part time as a carpenter, his private attorney said. He takes medication for epilepsy, lives with his grandmother and has a 7-month-old child, the attorney said.

Nieves was charged with murder in 2015 in connection to a fatal shooting of 16-year-old boy in Humboldt Park, but the charges were later dropped by prosecutors in 2019. At the time, Chicago police said the shooting was gang-related.

Santander is expected back in court Monday.

Police on Friday released surveillance video of two men wanted for robbing restaurant patrons at gunpoint earlier this month on the West Side.