It was a hectic 24 hours in the Loop between a bomb squad investigation Thursday afternoon, and a police shooting Wednesday night.

CHICAGO - It was a hectic 24 hours in the Loop – between a bomb squad investigation Thursday and a police-involved shooting Wednesday. In both instances, streets were blocked off and what are normally bustling areas came to a standstill.

The chaotic shootout near Columbus Drive and Lower Wacker Drive on Wednesday was all captured on camera.

Around 8:45 p.m. Wednesday, an unmarked police squad pulled in front of a stolen vehicle.

Within a matter of seconds, surveillance video obtained by CWB Chicago shows police officers exchanging gunfire with suspects inside the car in question.

Police can be seen swarming the car, while two innocent bystanders are rushed behind their own vehicles.

Three men are now behind bars in connection to the incident. Edgardo Perez, 24, has been charged with attempted murder of a Chicago police officer. Two other men in the car – Jesse Sanchez, 21 and Noel Centeno, 20 – are also facing felonies.

The Civilian Office of Police Accountability (COPA) is investigating. The officers involved have been placed on administrative duties for 30 days, per protocol.

Not even 24 hours later, less than a half-mile away, Citibank at Michigan Avenue and Lake Street was at the center of a bomb squad investigation Thursday. 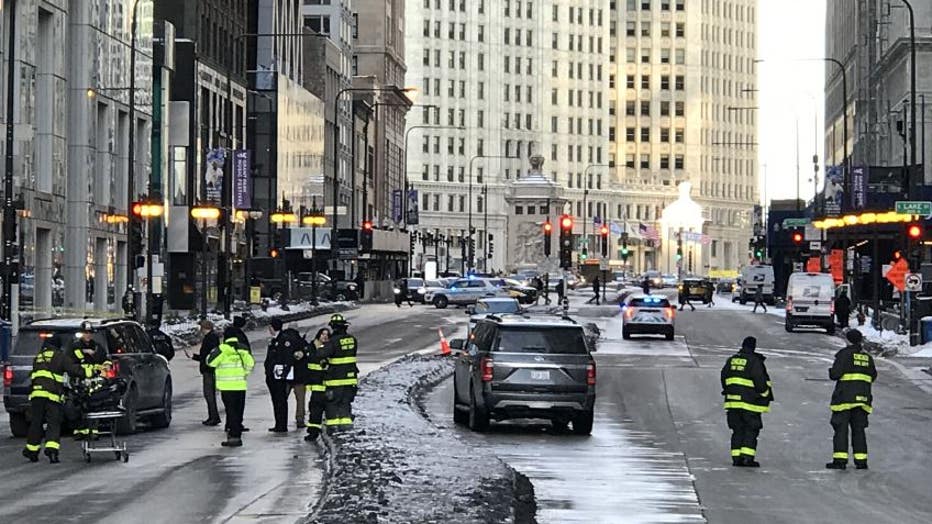 Just before 3 p.m., a suspicious jacket was found in a trash can – leading dozens of officers, K9s, a robot, and a bomb squad technician to close down the area for over an hour.

"That’s really horrifying. I mean, we’ve gotten used to my Citizen app going off a lot, with just shootings and other violent crime in the city, but to think there could actually be a bomb in this area, it’s such a high tourist area, that’s actually pretty scary," said Michelle London, who lives nearby.

Just after 4 p.m. Thursday, police gave an all-clear and reopened the streets.