While fielding questions on the 20th anniversary of 9/11, former President Donald Trump again hinted he would seek the presidency in 2024.

NEW YORK - Former President Donald Trump hasn’t confirmed whether or not he’ll seek the White House again in 2024, but he dropped another hint on Saturday.

Trump skipped joining President Joe Biden and other past presidents at official 9/11 memorial ceremonies Saturday at the World Trade Center and in Shanksville, Pennsylvania.

RELATED: From ground zero to Pentagon to Shanksville, US marks 20th anniversary of 9/11

Instead, he traveled several blocks from his Trump Tower building in Manhattan to the 17th police precinct and the neighboring fire station. Speaking to officers, Trump criticized the withdrawal from Afghanistan and expressed surprise about why it hadn’t come up in other 9/11 memorial speeches. "It was gross incompetence," he said of the exit.

As soon as he opened the floor for questions, a reporter asked if he would be running for president again in 2024.

He said he knows what he wants to do, but campaign finance laws prohibit him from saying too much at this point. 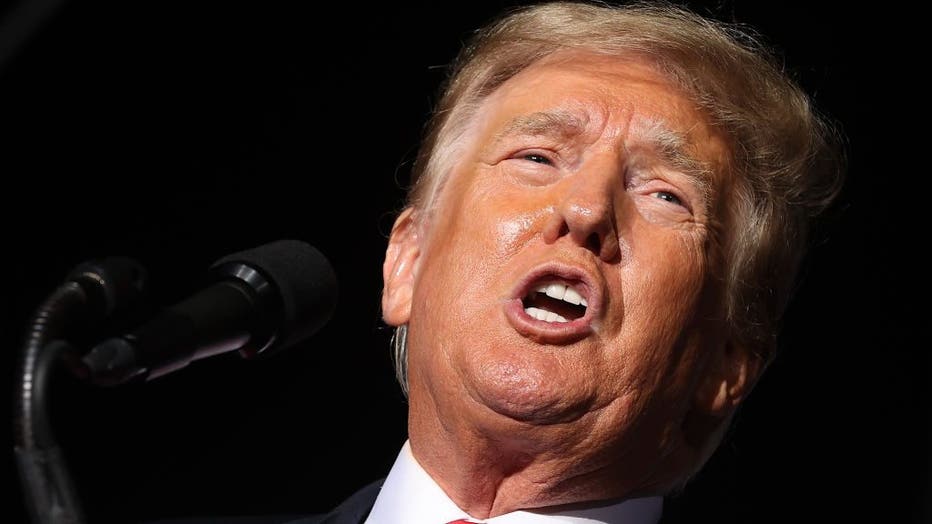 He continued by touting the accomplishments of his administration and blamed Biden for America’s current state of affairs — particularly the withdrawal from Afghanistan.

Ending the war in Afghanistan was a Trump administration deal set to be complete by May 1, 2021. Biden, who has been a supporter of ending the war for more than a decade, didn’t keep the Trump Era deadline, but he committed to bringing American forces home.

As America’s withdrawal neared completion, the Taliban overthrew the government and retook control of the country — largely because the Afghan military laid down their arms.

Trump criticized Biden for creating a power vacuum that the Taliban took advantage of and letting weaponry meant for Afghan troops fall into Taliban hands.

"They gave 85 billion of it away, brand-new Apache helicopters. Can you believe they gave them away? Why would you? You fly them out," Trump said. "And they had all the time in the world. We had everybody on hold. The Taliban was on hold. I dealt with the top guy, Abdul. And there was nothing he was going to be doing with us."

Trump then reiterated the 2020 election was "rigged," despite numerous federal and state election officials having deemed his claims of widespread voter fraud to be unfounded.

Numerous courts, some presided over by Trump-appointed judges, have come to the consensus that the 2020 election was not rigged.

Trump planned to end the day in Florida, where he is providing commentary on a boxing match.