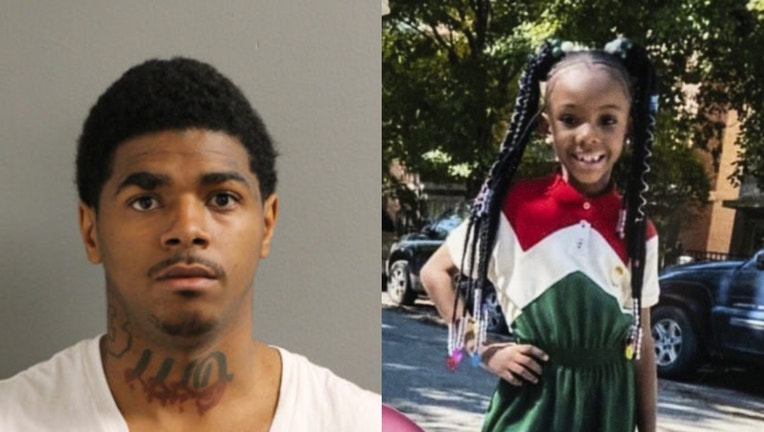 CHICAGO - The first of two alleged shooters who opened fire on a car at a West Side McDonald’s drive-thru — killing 7-year-old Jaslyn Adams — was ordered held without bail Friday.

Demond Goudy, 20, is facing murder and attempted murder charges for the April 18 shooting at the fast food restaurant, at 3200 W. Roosevelt Road, the Chicago Sun-Times is reporting.

Marion Lewis is also being held at Cook County Jail without bail for Jaslyn’s murder after he was taken into custody last week following a police pursuit on the Eisenhower Expressway. Lewis was shot by a police officer after the chase.

On the day of deadly shooting, Goudy was seen getting out of of the silver Audi Lewis was driving before firing a hail of bullets from a .40-caliber handgun at the car Jaslyn was in with her father, Assistant State’s Attorney Kevin DeBoni said.

A second uncharged gunman also opened fire on the car with a Draco AK-47-style rifle with a "banana clip," DeBoni said.

The two shooters then got back into the Audi, but got back out again when Jaslyn’s father began to drive away. They fired on the car a second time before speeding away, DeBoni said.

Jaslyn was shot multiple times and died at Stroger Hospital. Her father was also wounded.

Guns that matched the casings were found in Lewis’ possession when he was taken into custody after being tracked to an apartment in west suburban Lombard, DeBoni said.

A video posted on social media by Lewis earlier that day showed him driving around with Goudy and the uncharged shooter, who was seen holding the Draco rifle in the video, DeBoni said.

About two hours before the shooting, surveillance cameras recorded Goudy at a BP gas station, at 3159 W. Chicago Ave., when the group pulled up in the Audi, DeBoni said. There, a man noticed damage to the car, and allegedly gave Lewis a business card, saying he could repair it.

That man said he couldn’t identify members of the group, but his business card was later found inside Lewis’ apartment, DeBoni said.

Goudy was out on bond at the time of the shooting for weapons, robbery and drug charges in four separate felony cases, DeBoni said. As a juvenile, Goudy had faced similar charges, the prosecutor added.

Cathryn Crawford, an attorney with the not-for-profit Lawndale Christian Legal Center, told Navarro earlier this week that she needed time to investigate prosecutors’ evidence and potentially find witnesses for the bond hearing.

Crawford sought to delay the hearing again Friday. As Navarro listened to a motion to allow her to be physically in the room with her client during the live-streamed hearing, she compared the proceedings to a Russian courtroom, where defendants "sit in a cage" and are not allowed to converse during hearings with their attorneys.

Crawford also sought to prevent prosecutors from discussing Goudy’s juvenile criminal history and argued that prosecutors had not provided sufficient records in the case that would allow her to property defend Goudy — even at one point calling for the court to sanction DeBoni.

Navarro rejected each of Crawford’s motions.

Navarro allowed Crawford to speak with Goudy, but Crawford later returned to the hearing and said she had not been able to speak privately with her client because he wasn’t provided a private room and their conversation could be overheard and again called for the hearing to be delayed.

"It’s a violation of [Goudy’s] due process to continue this [hearing]," Crawford said.

Crawford ultimately declined to provide information in Goudy’s defense during the hearing.

Goudy is expected back in court for Jaslyn’s murder on May 19.