Chicago’s public health director Dr. Allison Arwady and Mayor Lori Lightfoot are once again urging residents to "mask up and vax up".

CHICAGO - Chicago’s top doctor said Sunday that there are no current plans for again imposing pandemic-related restrictions, despite a spike in COVID-19 cases.

"We have no goal or current plans to close down Chicago again," she said during a rare Sunday news conference. "But we need people please once again to step up."

Chicago lifted most pandemic-related restrictions in June amid dropping infections. But things have changed. Chicago’s average number of daily cases is 208, which is up 58% from last week when it was 131, according to the health department.

Arwady said 99.9% of vaccinated Chicagoans have not contracted COVID-19.

Chicago’s top doctor said Sunday that there are no current plans for again imposing pandemic-related restrictions, despite a spike in COVID-19 cases.

Arwady says more than 3 million vaccines have been administered in Chicago, about 60% of residents 12-and-older who are now fully vaccinated. With the Delta variant now making its rounds, people say the shot is now a "no-brainer".

"Having been hospitalized five days, having pulmonary issues, I can’t stress enough the value of the vaccinations," said Danica Monroe.

Arwady and Mayor Lori Lightfoot also defended holding Lollapalooza, a decision that’s drawn criticism for packing hundreds of thousands of people in a lakefront park. Gov. J.B. Pritzker, who’d planned to attend, skipped the event "out of an abundance of caution, with cases on a sharply increasing trajectory," his spokeswoman told WMAQ-TV. 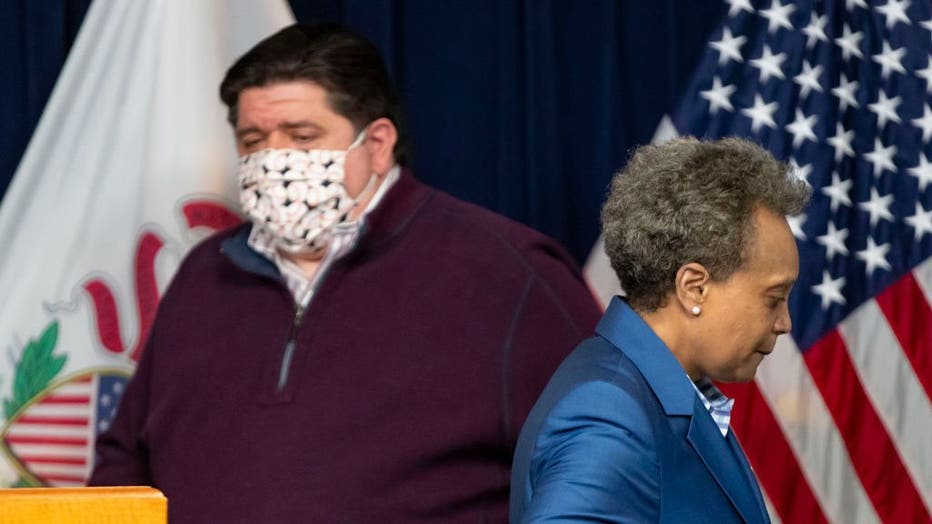 Chicago Mayor Lori Lightfoot speaks along with Illinois Gov. J.B. Pritzker at the Thompson Center on Sunday, May 31, 2020, the day after protests led to widespread damage in downtown Chicago. (Brian Cassella/Chicago Tribune/Tribune News Service via G

Lightfoot said 90% of attendees were vaccinated. She praised Lollapalooza’s organizers for doing "an incredible job" working with health officials on safety protocols. The festival ends Sunday.

"I feel very good about what we’ve done," Lightfoot said. "Obviously we’ll know a little more in a week to 10 days."