CHICAGO - Roughly 2,000 protesters were estimated to attend a march on the Dan Ryan Saturday, according to the Office of Emergency Management and Communications.

Beginning at noon, demonstrators planned to march on the expressway at 47th Street and the exit at 43rd. From there, they would proceed to Grant Park for a 4 p.m. protest.

State police say they are aware of the planned protest. In a statement released Friday, the department said they will "protect the rights of those seeking to peacefully protest while ensuring the safety of the public."

Roughly 2,000 protesters are estimated to attend a march on the Dan Ryan Saturday, according to the Office of Emergency Management Communications.

Due to unrest in Chicago on Sunday night and Monday morning, CPD says they are taking proactive measures to ensure people can protest peacfully, while also protecting Chicago residents and businesses from rioting and looting.

During a news conference on Friday, Mayor Lori Lightfoot outlined a strategy to stop any attempts at looting and destruction that could potentially occur this weekend.

This includes a Chicago Police team monitoring social media around the clock for efforts to organize looting or other crime.

The looting that occurred earlier this week is said to have started because of a police-involved shooting that happened on Sunday in Englewood.

A 20-year-old man, Latrell Allen, was shot during an exchange of gunfire with police and has been held on $1 million bail.

On Friday, protesters took to the streets demanding the 20-year-old be released from custody.

Following the shooting Sunday night, police said more than 100 people were arrested and 13 officers were hurt in Chicago due to destruction and looting.

Videos of people looting were released by CPD earlier this week to try and identify suspects who took part in the destruction.

Many businesses were affected by the violence and destruction.  Some owners say they may not open back up again due to the fear of being hit by looters again.

March on the Dan Ryan chain of events

At approximately 12:25 p.m., demonstrators gathered together at 47th and State before marching on the Dan Ryan. A few people spoke about the lives the have lost due to police-involved incidents.

A few agitators were among those in the crowd, and tempers began to rise.

Around 12:50 p.m., protesters began to march away from the Dan Ryan.

Police seem to have directed protesters away from the Dan Ryan, and now, the demonstrators are marching through side streets.

At around 1:13 p.m., protesters continued to march, while a line of police cars followed closely behind: 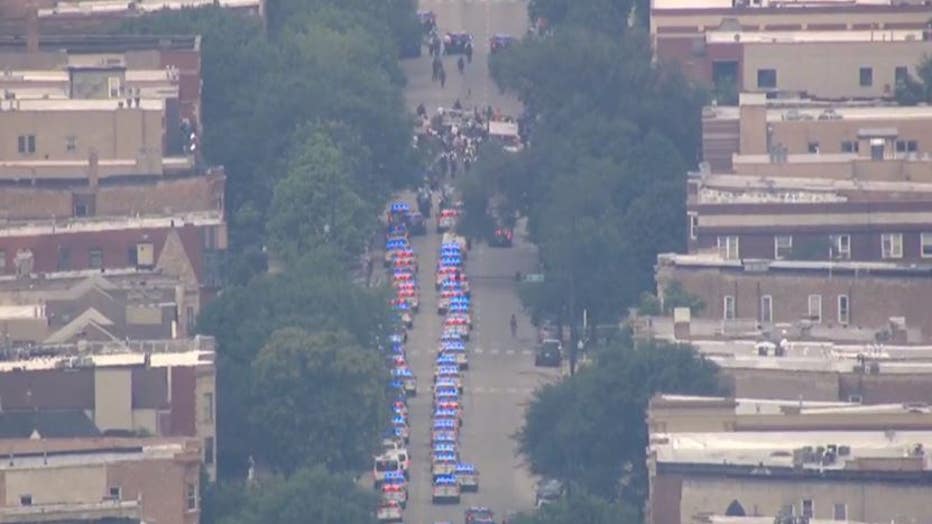 At about 2 p.m., many people took to social media to say that the protesters will now be avoiding the Dan Ryan due to police presence and will go directly to Grant Park, where a 4 p.m. protest is expected to happen.

There was a lesser turnout of protesters than expected - potentially only a few hundred, according to Twitter.

We will provide updates to this story as they become available.