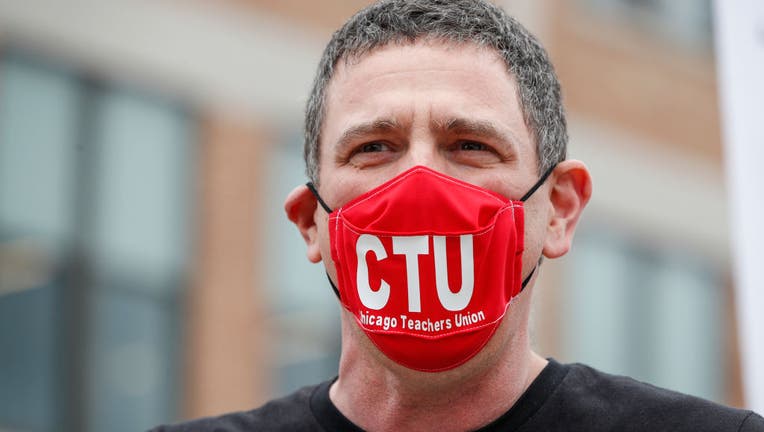 Chicago Teachers Union President Jesse Sharkey speaks prior to the Occupy City Hall Protest and Car Caravan hosted by CTU in Chicago, Illinois, on August 3, 2020. - Teachers and activists hold car caravan all over the country on August 3, 2020 to dem

CHICAGO - Only half of Chicago Public Schools teachers expected in schools ahead of preschool students’ anticipated return next week showed up, district officials said Tuesday in an increasingly contentious battle over classroom learning during the coronavirus pandemic.

The nation’s third-largest district plans a gradual return to in-person classes starting this month after going remote last March, which the Chicago Teachers Unions has fought over safety concerns.

Starting Monday, preschool and some special education students can return or continue online. Students in K-8 have the same option Feb. 1. Roughly 77,000 students have said they’ll return, about 37% of eligible students. Plans for high school students haven’t been announced.

District officials say online learning isn’t working for many students in the district where most of the roughly 355,000 students are low income and Black or Hispanic.

"We cannot sit back and allow a generation to just falter because of made up reasons around why we can’t do reopening," district CEO Janice Jackson said at a news conference. "A year from now there is going to be a reckoning around what happened to those students that have been sitting at home, not being properly served."

In Chicago, about 5,800 teachers and staff members were ordered to report to work Monday before students return next week. Roughly 60% did so, according to CPS. Among teachers, the rate was about 50%.

Teachers at Brentano Elementary Math and Science Academy on the city’s North Side protested Monday by teaching online classes outside. Several bundled up in winter gear hovered over computers in 27-degree (-2.78 degrees celsius) weather.

"Many of our members are not feeling safe at all," union President Jesse Sharkey told reporters Tuesday.

The union, which represents 24,000 employees and went on strike in 2019, has fought the plan. Last month, a labor court declined to halt reopening.

Union officials sidestepped questions about another possible strike, which requires several steps to authorize, and promised stepped up demonstrations. The union wants to delay reopening until vaccine distribution is widespread and said the district’s communication and safety measures fall short.

"We see clearly that contrary to the words of our mayor and CEO this reopening plan does not seek to address inequity, it is promoting inequity," Troy LaRaviere, president of the Chicago Principals and Administrators Association, said at a Tuesday news conference.

Jackson dismissed the concerns, saying that data doesn’t "nullify the obligation to be responsive."

Teachers could face discipline for continuing to fail to report for work, which would be handled on case-by-case basis, district officials said. Hundreds of employees have permission to continue remote teaching.

Jackson said thousands of CPS employees have shown up for work throughout the pandemic, including principals and nutrition support staff who have handed out free meals for students in need.

The district’s safety plan includes over 9,500 air purifiers and requiring masks for students and teachers. In making their case, CPS cited medical experts’ concerns about children’s development and mental health and a city study looking at cases in private schools, which have largely remained open this academic year.

"Though it is not zero risk proposition, it is safe," she said.

Chicago, which is averaging 942 cases daily, saw a spike following Thanksgiving but not to the extent other places did. Health officials statewide have been bracing for a post-Christmas increase.