Jussie Smollett reacts to jail sentence for hate crime hoax: 'I am not suicidal'

Jussie Smollett was sentenced to 150 days in Cook County Jail for staging a hate crime and lying to Chicago police in 2019.

CHICAGO - Hollywood couple Samuel L. Jackson and LaTanya Richardson were among those to offer support for Jussie Smollett ahead of his sentencing on Thursday.

Letters from Jackson, his wife, an organizer with Black Lives Matter, and Jesse Jackson's Rainbow PUSH Coalition were among those read Thursday in the Chicago courtroom, where Cook County Judge James Linn ultimately sentenced Smollett to 150 days in jail for lying to police in what authorities said was a staged hate crime.

"It is with the respect of knowing this, that I humbly implore you to please find an alternative to incarceration for Jussie Smollett," Jackson and Richard wrote in the Feb. 24 dated letter, according to Entertainment Tonight. "It is my understanding that Jussie was convicted of Class 4, disorderly conduct, which to my understanding, people convicted of this offense historically are sentenced to various alternatives to incarceration." 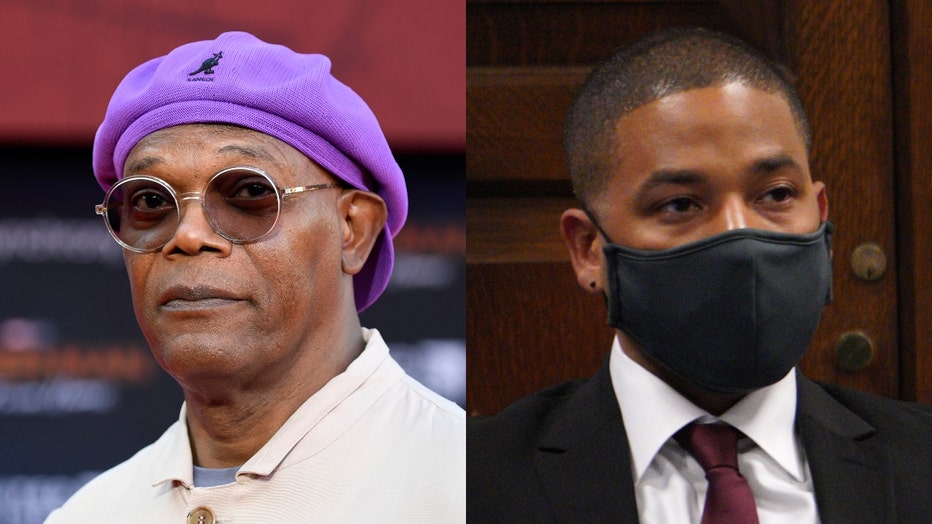 "Jussie has already suffered a great deal of punishment, as this situation has destroyed his existing career and impugned his reputation," the letter added, according to ET. "Please Judge Linn, in God's name, please save this young man and allow him to be of service. Jussie Smollett is worth the risk and the investment."

"Please save this young man and allow him to be of service. Jussie Smollett is worth the risk and the investment."

— Samuel L. Jackson and LaTanya Richardson, in letter to judge

The letters also urged the judge to consider how the case had impacted Smollett’s life, and career and hoped Smollett would avoid any confinement as part of his sentence.

At risk behind bars?

Other supporters warned that Smollett, who is Black and gay, would be at risk behind bars. They mentioned his race, sexual orientation, and his family’s Jewish heritage.

On Thursday, Linn sentenced Smollett to 30 months of felony probation and 150 days in the county jail. Linn ordered Smollett to be immediately placed in custody and pay $120,106 in restitution.

Jussie Smollett was sentenced to 150 days in Cook County jail at his sentencing Thursday afternoon. Attorney Steve Greenberg joins Good Day Chicago to break down Smollett's exist from the courtroom, and comments from the judge.

After Jackson and his wife's letter was sent, the actor spoke with ET and said the couple tries to "give service in every way we possibly can."

"There are wrongs that need to be righted and someone’s gotta stand up because if we don’t stand up for anything, we'll fall for everything," Jackson said.

In 2019, Smollett claimed that two men attacked him due to his skin color and sexual orientation. He was sentenced Thursday for lying to police about the racist and homophobic attack, which he orchestrated himself.

Jussie Smollett was sentenced to 150 days in jail, a place he probably didn't expect to be

After being found guilty of staging a hate crime hoax in 2019, Jussie Smollett will face five months of jail time in Cook County. Joanie Lum was outside the Cook County Jail Friday morning with more.

After the 2019 attack, some Hollywood celebrities spoke out in support of Smollett, including his former "Empire" co-stars Taraji P. Henson and Terrence Howard.

"All your lil homies got you... We love the hell outta you," Howard wrote on Instagram in February 2019 – just one day after the show's producers announced that Smollett's character, Jamal Lyon, would be removed from the final two episodes of that season.

Other actors and actresses to speak out in defense of Smollett following the attack included Tyler Perry, Rumer Willis, O'Shea Jackson Jr., and Cynthia Nixon.

Fox News' Jessica Napoli and the Associated Press contributed to this report.