High gas prices and the higher airfares that come with them do not appear to be keeping people from traveling for spring break if the crowds at O'Hare Airport on Friday were any indication.

CHICAGO - High gas prices and the higher airfares that come with them do not appear to be keeping people from traveling for spring break if the crowds at O'Hare Airport on Friday were any indication.

Some passengers like Derek Adams were surprised. Adams was heading home to Houston after four months of boot camp at Great Lakes Naval Station.

"This is actually ridiculous. This is too many people in here with everything going on right now," he said. "And flights are expensive. My flight was $689. And that's with the military discount."

John Duffey and his wife were taking their two children to Disney World in Orlando, an especially popular location right now. 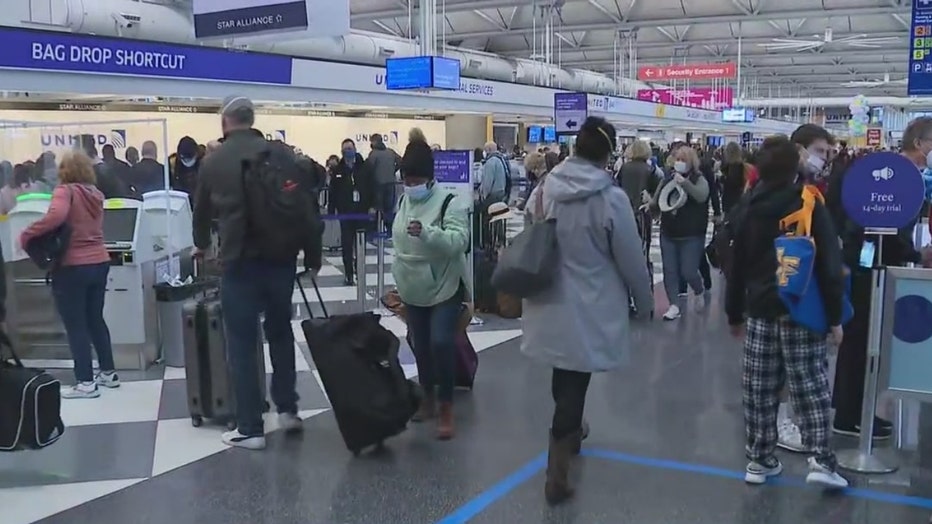 "Actually it's the trip we had to cancel right when the pandemic happened. We're taking all of our credits now and taking the trip that we should've taken two years ago," he said.

"We are so excited, we've been looking forward to this for the last two years. We couldn't be more excited to go to Disney World," Courtney Duffey said.

Another family heading to Disney World and then a cruise said they just wanted "to let the kids experience new things and get out of their current elements that they've been in for so long. We're going big," said Kim Landsom.

United is hoping to keep the high volumes moving quickly through the airport with some new innovations.

"If you download your United application, you can check-in through the app," said Omar Idris, Vice president for United's O'Hare hub. "Declare how many bags you're checking in, come into the airport and, in a touchless way, scan your barcode and out will come your bag tag. So it's a fast transaction. It's efficient for you, and it makes it really easy for us to check-in large numbers of customers in a very short amount time."

"We really encourage you to do as much as you can the day before or the morning of by using the app."