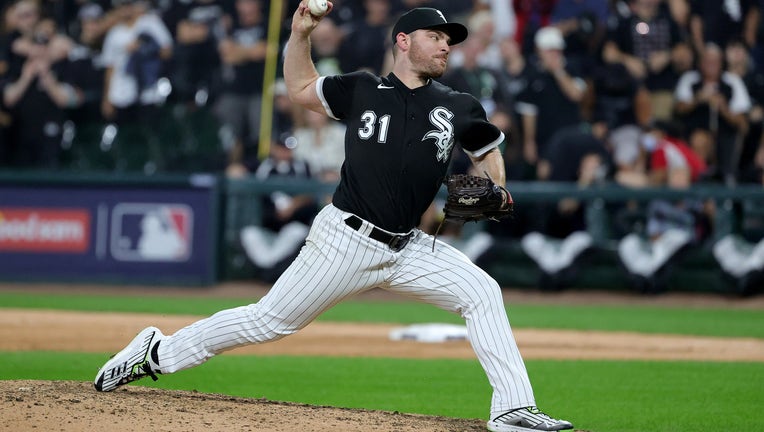 CHICAGO, ILLINOIS - OCTOBER 10: Liam Hendriks #31 of the Chicago White Sox pitches in the ninth during game 3 of the American League Division Series against the Houston Astros at Guaranteed Rate Field on October 10, 2021 in Chicago, Illinois. (Photo

Right when the Chicago White Sox got in big trouble, they found a way.

John Mares of Lockport, Illinois, went viral earlier this summer for his video showing how his local Walmart carried a section of Chicago Cubs gear, but no Chicago White Sox gear. Now, things have changed.

"It’s a real tough-minded bunch," White Sox manager Tony La Russa said, "and sometimes you get rewarded with a comeback like that."

Houston was hoping to sweep its way into its fifth consecutive appearance in the AL Championship Series. The AL West champions got off to a fast start behind Kyle Tucker, but they went down in order in the last five innings.

Game 4 of the best-of-five series is scheduled for Monday afternoon, but there is rain in the forecast.

The playoff-tested Astros rolled into Chicago after a pair of impressive victories at home, then jumped out to a 5-1 lead in Game 3. The sweet-swinging Tucker hit a two-run double off Cease in the second and a two-run homer off Kopech in the third.

Houston’s fast start silenced the towel-waving crowd, but it got revved up again in the bottom half of the third.

After Grandal’s two-run shot just over the wall in left made it 5-3, Yoán Moncada and Gavin Sheets reached on two-out singles. Leury García then looked at two balls from Luis Garcia before Baker replaced his starting pitcher with Yimi García (0-1).

The winner of the Garcia trilogy was Leury, listed at 5-foot-8 and 190 pounds. The versatile veteran drove a 3-1 pitch from Yimi García deep to center for a 436-foot homer.

The BBB said that baseball fans buying tickets online need to do their homework on sellers, because it might be impossible to tell if a ticket is real until you're turned away at the gates of Guaranteed Rate.

"I mean that ball was scalded," La Russa said.

The game was tied at 6 when the White Sox went ahead to stay with three runs in the fourth — highlighted by a memorable run by Grandal that rankled Baker and the Astros.

After José Abreu’s tiebreaking RBI single put runners on the corners with none out, Grandal hit a bouncer to Yuli Gurriel at first. Gurriel tried to come home, but his throw went went off Grandal as the catcher sprinted up the line in the infield grass.

"I wish I could tell you it was a heads-up play," Grandal said. "I was just trying to get to first. It takes me a long time to get there."

Luis Robert scored, taking out umpire Tom Hallion in the process, and Gurriel was charged with an error. The Astros lobbied for an interference call on Grandal, but the umpires huddled and left the play in place.

Baker then had a long argument with Hallion before returning to the dugout.

"Clearly, he was running inside," Baker said. "I mean, that’s interference, you know, in itself. That was a big play because we didn’t get an out."

The 77-year-old La Russa, who became the oldest manager in major league history to win a postseason game, said the umpires made the correct call.

"I guarantee you that there was no intent to interfere with that play. I can guarantee it," La Russa said.

Eloy Jiménez capped the big fourth with his second RBI single, and the White Sox put it away with three more runs in the eighth. Leury García doubled in Andrew Vaughn and scored on Anderson’s single.

The 16-hit attack for Chicago — a franchise postseason record — overshadowed perfect relief by Ryan Tepera, Aaron Bummer, Craig Kimbrel and Hendriks. Tepera worked two innings before Bummer got five outs. Kimbrel got the last out of the eighth before Hendriks finished.

"All I can say really is it was a lot of fun," Tepera said.

NOT BAD AT ALL

Anderson has 16 hits in six career playoff games, the most by any player in a six-game postseason span.

Carlos Rodón starts Game 4 for the White Sox. Rodón went 13-5 with a 2.37 ERA in 24 starts this year, but he was limited down the stretch because of shoulder soreness and fatigue. The Astros will start José Urquidy, who was 8-3 with a 3.62 ERA in 20 starts.