CHICAGO - Former Illinois House Speaker Michael Madigan was indicted by a federal grand jury Wednesday on racketeering and bribery charges for allegedly using his position to solicit and receive personal financial rewards for himself and his associates.

Madigan, 79, of Chicago, is charged with racketeering conspiracy and individual counts of using interstate facilities in aid of bribery, wire fraud and attempted extortion.

The 22-count indictment accuses Madigan of leading a criminal enterprise for nearly a decade to enhance his political power and financial well-being.

He also allegedly generated income for his political allies and associates.

According to the indictment, Madigan directed the activities of his close friend, co-defendant Michael McClain.

McClain, 74, of Quincy, is charged with racketeering conspiracy and individual counts of using interstate facilities in aid of bribery and wire fraud.

The charges allege that Madigan and McClain caused various businesses, including Commonwealth Edison, to make payments to Madigan’s associates as a reward for their loyalty to Madigan. At times, this was in return for performing little or no legitimate work for the businesses, the indictment said.

Madigan, McClain and other members of the criminal enterprise allegedly solicited benefits from businesses and other private parties as well.

Madigan is accused of engaging in multiple schemes to "reap the benefits of private legal work unlawfully steered to his law firm," prosecutors said.

"Corruption by an elected official and his associates undermines the public’s confidence in our government," said U.S. Attorney Lausch. "The indictment alleges a long-term, multifaceted scheme to use public positions for unlawful private gain.  Rooting out and prosecuting the kind of corruption alleged in the indictment will always be a top priority for this office."

Madigan is scheduled to be arraigned on March 9. He may enter a plea at that court appearance.

Madigan is now one of the most significant politicians in Illinois history ever to face criminal charges, despite having left office more than a year ago. The news is the culmination of one of the most significant, expansive public corruption investigations Illinois has seen in years, already leaving an indelible mark on state politics by knocking Madigan out of power in January 2021. 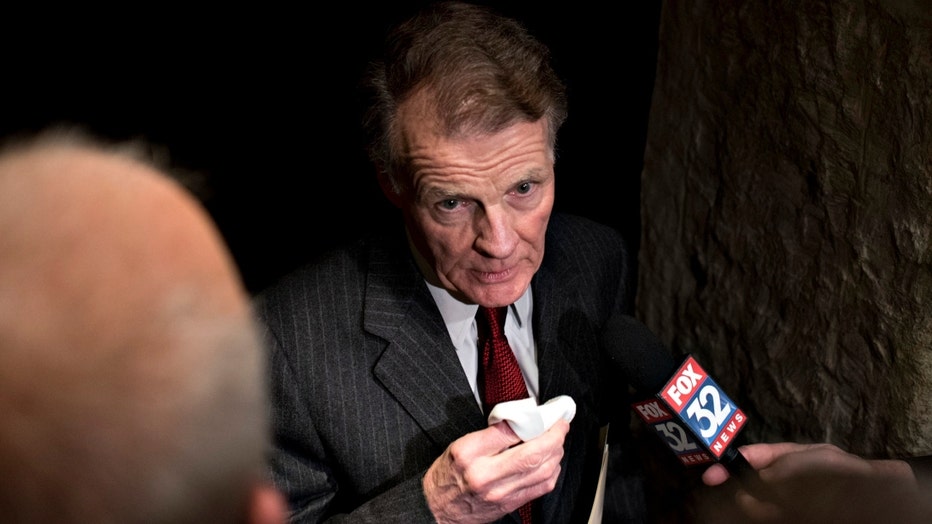 Michael Madigan, as speaker of the Illinois House of Representatives and chairman of the Democratic Party of Illinois, speaks to the media following a press conference at the State Capitol in Springfield, Illinois, U.S., on Wednesday, Feb. 18, 2015.

The powerful Southwest Side Democrat had held his seat in the state House of Representatives since 1971 and served as speaker for all but two years between 1983 and 2020.

Gov. J.B. Pritzker and Mayor Lori Lightfoot reacted to the news minutes after it broke in the middle of a University of Illinois Chicago news conference at UIC alongside U.S. Treasury Sec. Janet Yellen, leading to a series of uncomfortable questions in front of the visiting federal Cabinet official.

"I’ve been saying for years now that we’ve got to root out corruption wherever it exists, and it’s why we’ve passed and I’ve signed ethics reforms in the state of Illinois," said Pritzker, who is up for reelection in November. Government watchdog groups have roundly criticized the state’s ethics reform efforts so far as insufficient.

Madigan helped shepherd several of Pritzker’s signature pieces of legislation during the Democratic governor’s first year in office, including a massive $45 billion capital infrastructure plan and the legalization of cannabis.

Pritzker’s office followed up with a written statement deeming the allegations "deplorable and a stark violation of the public’s trust. Michael Madigan must be held accountable to the fullest extent of the law."

Lightfoot, a former federal prosecutor, declined to comment on the specifics of the allegations against Madigan, but said that U.S. Attorney John Lausch "better have a tight case, because if you’re going to take the shot, you’re not going to want to miss."

"This is the kind of case, if it is in fact true, of such incredible significance — somebody who has really shaped Illinois politics for 40 years, dominated almost every aspect of life from a political standpoint, from a legislative standpoint," the Logan Square Democrat said.

"I definitely think there’s more to come. It doesn’t appear that Alderman Solis (Danny) was just dealing only with Madigan. They were recording those conversations as well, using electronic devices. There are thousands of hours of conversations. I wouldn’t be surprised to see indictments of others going forward."

Madigan said in a statement he has never been involved in criminal activity.

He said the government is trying to criminalize a routine service: job recommendations.

In Springfield, Illinois House Speaker Emanuel "Chris" Welch — the man who took up the gavel that Madigan held for most of four decades — said the indictment showed that the feds "did their job," one that couldn’t have been handled by the investigative committee Welch chaired to look into the allegations against Madigan.

The sitting speaker said his office "has fully cooperated with the investigation and will continue to do so."

In the other statehouse chamber where Democrats also hold a super-majority — thanks to decades of Madigan’s indomitable party organization — Illinois Senate President Don Harmon said "these are obviously disturbing allegations. I have confidence in our system of justice. Like everyone else, I will be watching to see how this unfolds."

On the other side of the Capitol aisle, Republicans pounced on the indictment of Madigan, whom they’ve long painted as the face of Illinois corruption.

State Senate Republican Leader Dan McConchie said the indictment "underscores why it is so important to empower a statewide grand jury on corruption — so we can finally begin to clean up our own house."

U.S. Rep. Robin Kelly, who replaced Madigan as chair of the Democratic Party of Illinois, called the indictment "a stark reminder that elected leaders must hold themselves to the highest ethical standards" — and she called on him to resign from his post as state central committeeperson for the 3rd Congressional District.

Cook County Board President Toni Preckwinkle, who chairs the county Democratic Party, also called on Madigan to give up his separate 13th Ward committee post, calling it "a shameful day for Illinois politics."

"Our political organizations should not double as criminal enterprises," she said in a statement.

House Democrats who revolted against Madigan in 2021 when he tried to hold onto his speaker gavel called the indictment "a watershed moment for our state that reminds us of the work ahead, as the former speaker’s case makes its way through the legal system."

"We knew that our chamber, our state and our party deserve better leadership, and the unfolding corruption scandal would only continue to erode public confidence in our work," North Side state Rep. Kelly Cassidy said. "This is a sad day, a reminder of a terrible abuse of power that undermined our constituents’ faith in our government."

State Rep. Ann William, who challenged Madigan for speaker, said in a statement that "accountability and integrity should be at the foundation of public service. Unfortunately, this was lost in the pursuit of personal gain and political power. Collaboration and inclusion took a back seat to a culture of cronyism and control."

Candidates vying to take on Pritzker as the Republican nominee for governor piled on the incumbent for his ties to Madigan.

State Sen. Darren Bailey, R-Xenia, accused Pritzker of being "Mike Madigan’s handpicked gubernatorial candidate." Former state Sen. Paul Schimpf, R-Waterloo, said Pritzker "bowed down and kissed Madigan’s ring when it was advantageous for him. No amount of revisionist history gives the governor the right to clutch his pearls now."

Bull Valley businessman Gary Rabine called the indictment "another black eye for the state of Illinois and the Illinois Democratic Party," while downstate venture capitalist Jesse Sullivan blasted Madigan as "the very face of Illinois corruption."

Even disgraced ex-Gov. Rod Blagojevich weighed in with a video posted to Twitter, though his words for Madigan weren’t as harsh.

"The Illinois Republican Party is committed to exposing and defeating every last Democrat still around that accepted Madigan’s money, voted Madigan’s way, or defended him as the leader of their party. The list of those needing to be held accountable for what happened is long, and it starts with Governor JB Pritzker."

RELATED: Mike Madigan steps down from role as chairman of Illinois Democratic Party