George Smyrniotis, who served as First Deputy General Counsel for the district, alleged that Lightfoot berated him over a Zoom call, damaging his reputation and leading to the loss of his job as well as causing him emotional distress.

CHICAGO - A lawsuit was filed against the City of Chicago and Mayor Lori Lightfoot Wednesday, claiming she used obscene language and defamed a former Chicago Park District lawyer who was involved in the Christopher Columbus statue controversy in 2021.

George Smyrniotis, who served as First Deputy General Counsel for the district, alleged that Lightfoot berated him over a Zoom call, damaging his reputation and leading to the loss of his job as well as causing him emotional distress.

The Columbus statue was removed from Arrigo Park in Little Italy in the summer of 2020 after it had become the target of protests and unrest after the murder of George Floyd.

On behalf of the Chicago Park District, Smyrniotis penned a letter of agreement with the Joint Civic Committee of Italian Americans (JCCIA), allowing them to briefly display the statue at the 2021 Christopher Columbus Day parade.

Lightfoot allegedly took umbrage to the agreement, telling an Italian-American leader she would pull the permit for the parade if the statue made an appearance, according to the lawsuit.

An Italian American group is suing the city of Chicago to restore the Christopher Columbus statue that was removed during protests last year.

She then berated Smyrniotis and his General Counsel Timothy King in a Zoom call on the night of the parade, the lawsuit claims.

"You d****, what the f*** were you thinking? You make some kind of secret agreement with Italians, what you are doing, you are out there measuring your d**** with the Italians seeing whose got the biggest d***, you are out there stroking your d**** over the Columbus statue, I am trying to keep Chicago Police officers from being shot and you are trying to get them shot. My d*** is bigger than yours and the Italians, I have the biggest d*** in Chicago."

The Chicago Park District contracted the Columbus Statue Committee to maintain the statue and plaza in 1973. The statue was forged in Italy in 1892. As part of the agreement, JCCIA must approve if substantial changes to the statue or plaza are made.

The statue’s removal during the 2020 protests prompted a lawsuit from the Joint Civic Committee of Italian Americans against Lightfoot and the City of Chicago, calling for the return of the statue to Columbus Plaza in Arrigo Park.

Smyrniotis was assigned to represent the park district, which legally owns the statue. He allowed the JCCIA to inspect the statue at their request, attorneys said.

Roughly a week before the annual Columbus Day Parade, JCCIA representatives asked Smyrniotis if they could display the statue in the parade, unveiling it for 20 minutes before returning it to the park district.

Smyrniotis reached a written agreement with JCCIA to briefly display the statue at the parade and then hand it over to them on the condition that it not be displayed inside city limits, the lawsuit states.

Chicago Park District security was alerted that the statue would be presented at State and Lake streets during the parade and contacted Chicago police to request support.

Lightfoot allegedly met with a lead representative from the Italian-American community two days before the parade and said if the statue was revealed, she would remove her permit for the entire parade.

The statue was not used in the parade and that evening, Smyrniotis and Lightfoot got on a Zoom call with park district general counsel Timothy King; park district COO Pat Lavar; Avis LaValle, president of the Chicago Park District Board of Commissioners; John Hendricks, chief constitutional and commercial lawyer for the City of Chicago and Celia Meza, corporation counsel for the City of Chicago.

The lawsuit claims Lightfoot made insulting remarks about Smyrniotis, belittling his expertise as a lawyer.

"Where did you go to law school? Did you even go to law school? Do you even have a law license? You have to submit any pleadings to John Hendricks for approval before filing. John told you not to do a f***ing thing with that statute without my approval. Get that f***ing statue back before noon tomorrow or I am going to have you fired," Lightfoot said, according to the complaint.

Smyrniotis has been a licensed attorney in Illinois since 1989 and was employed by the park district since 2007.

The 65-year-old said he was forced to resign on Feb. 2, 2022. The lawsuit is seeking $57,240 in compensatory damages due to loss of income from a reduced pension.

The lawsuit will be brought to court on May 5. 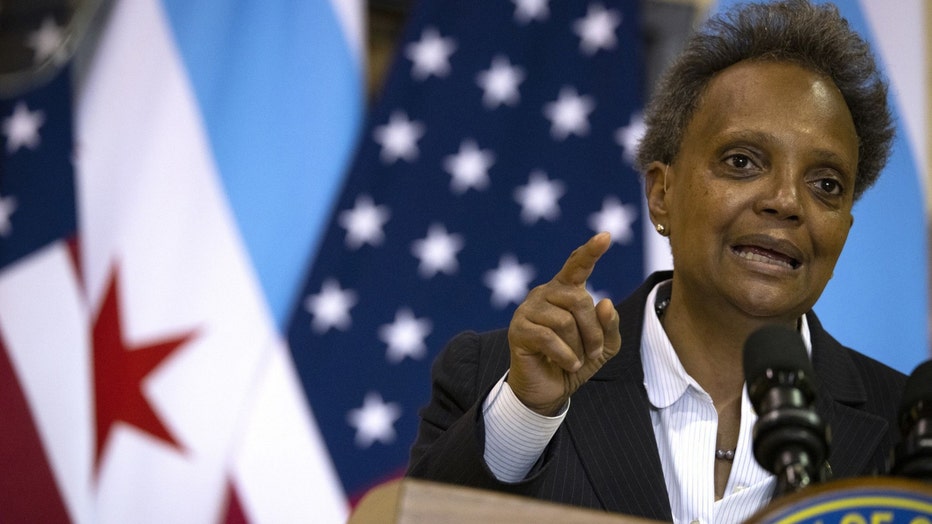 Ron Onesti, president of the JCCIA, said he is calling on Lightfoot to apologize.

"I’m literally beside myself with amazement. Even though she’s shown signs of this type of behavior in the past, I can’t believe, number one, that she would talk to her attorneys this way. How do you talk to anybody this way?" Onesti said.

Onesti was so infuriated by Lightfoot’s obscene reference to Italian Americans he said he was "on the verge of demanding the mayor’s resignation."

"We, as Italian-Americans, are deeply offended. I’ve got to say it’s practically irreparable. That’s why I’m teetering on the apology issue. Because, for her to apologize — I mean, there is irreparable damage," he said.

Christopher Columbus has been a contentious figure in Chicago.

In 2020, Chicago Public Schools voted to do away with Columbus Day in favor of Indigenous Peoples Day.

"It felt like a real act of solidarity on the school board’s part in terms of thinking about the correct way to talk about our history and the founding of this country," said Heather Miller of the American Indian Center of Chicago.

Tensions were heated Friday night in Grant Park as protesters clashed with Chicago police, hurling objects at officers and attempting to tear down a statue of Christopher Columbus.

The JCCIA was not pleased with the decision.

"For Italian Americans, who endured horrific discrimination and continue to be the subject of stereotypical degradation in popular culture, Christopher Columbus is a symbol for the resilience of a people that have helped shape the cultural landscape of this great nation," they said in a statement.

The fight over Columbus extended to three statues across the city.

On July 17, 2020, hundreds of protestors gathered around the Columbus statue in Grant Park and attempted to tear it down, clashing with police officers.

Eighteen officers were injured and a dozen protestors were arrested.

Columbus statues in Grant Park and Arrigo Park were taken down by the city during the early morning hours a week after the demonstration.

Alderman Carlos Ramirez-Rosa of the 35th Ward is also speaking out.

"I think that it’s totally inappropriate for anyone in a position of power to talk about genitals or the size of the genitals, or make those types of demeaning comments to someone who is a public employee," said Ramirez-Rosa.

Ramirez-Rosa said if true, the mayor's alleged remarks are toxic and unacceptable in any workplace.

"It’s not a joking matter. This has an impact on our ability to retain top talent, it has an impact on people’s work environment," said Ramirez-Rosa. "So many people have had to deal with abuse in the workplace from their boss, and I think we should expect more from our mayor."