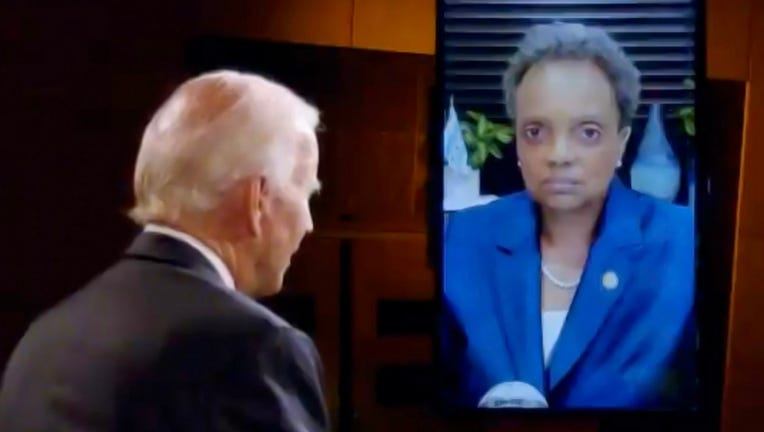 In this screenshot from the DNCC’s livestream of the 2020 Democratic National Convention, Presumptive Democratic presidential nominee former Vice President Joe Biden has a conference call with Chicago Mayor Lori Lightfoot during the virtual conventio (DNCC via Getty Images / Getty Images)

Lightfoot was asked about critics who have scolded her for hypocrisy during an MSNBC segment that featured video of the liberal mayor in the middle of a “massive” crowd less than a week ago.

“You can see the shot here. Mask compliance in our city is actually up very, very high,” Lightfoot said. “There are times when we actually do need to have relief and come together, and I felt like that was one of those times. That crowd was gathered whether I was there or not.”

While Lightfoot feels that Biden supporters needed a “relief,” she doesn’t think Americans who want to gather with their loved ones for Thanksgiving deserve the same privilege.

The advisory calls on all Chicagoans to do the following: "Stay home unless for essential reasons, Stop having guests over — including family members you do not live with; Avoid non-essential travel; Cancel traditional Thanksgiving plans," Lightfoot summarized on Twitter.

Last Saturday, Lightfoot was seen maskless while touting the projected victory of President-elect Biden in a video she shared on her Twitter account.

The video showed a mask dangling from one of Lightfoot's ears as the people surrounding her also failed to practice social distancing guidelines.

"People couldn’t be with their loved ones in their final moments on this earth, families couldn’t hold funerals and grieve together, churches were closed under threat of penalty, but Lori Lightfoot can flout all the rules and scream into a megaphone," radio host Dana Loesch, who was among Lightfoot’s many critics, reacted to the latest lockdown order.