Snow could turn to ice overnight, meaning Tuesday morning's commute could be rough.

CHICAGO - Chicago commuters woke up to a snowy Monday morning commute and Tuesday will be downright frigid.

A Metra spokesperson says don’t worry, though, because they are salting the platforms and outside stations – helping you get safely to work.

"When it gets really cold, like it's expected to, we'll have staff out there to address the problems immediately should one arise," said Michael Gillis, a spokesperson for Metra.

When the deep freeze sets in, Metra takes extra steps to make the commute smooth and warm. They keep trains running overnight and employees work overtime monitoring the tracks, sometimes using fire to warm the switches.

"We have gas burners that are next to the switch heaters – looks like the tracks are on fire," said Gillis. 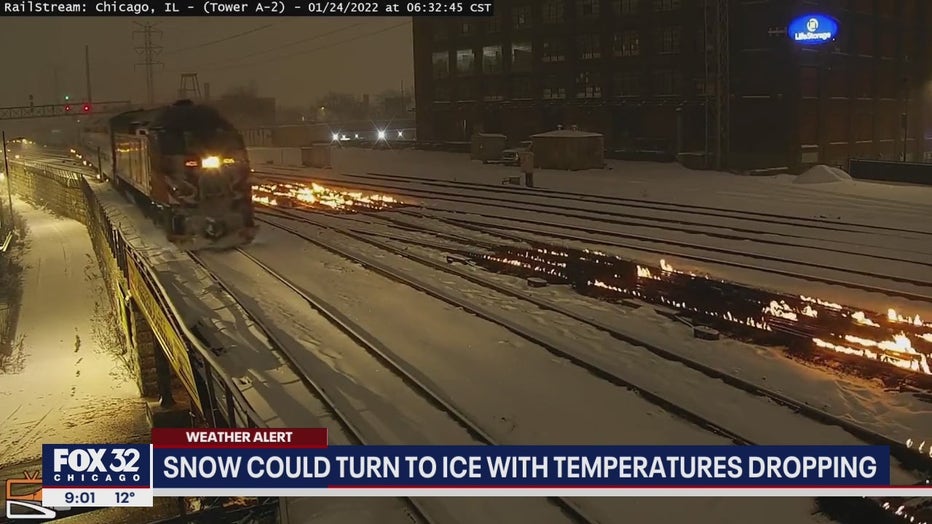 The next 48 hours are expected to be dangerously cold. Many communities have set up warming shelters, like at Aurora's Transportation Center on south Broadway, open daily from 7 p.m. to 7 a.m.

As we await the brutal chill, some residents are still dealing with snowy conditions and awaiting the plows to get to their street.

All across the city, residents woke up to a fresh blanket of light snow Monday and dug themselves and their cars out, before throwing trashcans or other items in their parking spots.

Numerous "dibs" were seen on 18th Place near Carpenter in Pilsen.

Between four and six inches fell around the Chicago area over the last two days with temperatures expected to drop this week.

City officials said when it snows, residents or their property managers are responsible for shoveling the sidewalk.

One resident was frustrated about the practice.

"I'm gonna swear and you're gonna have to bleep me out. It's terrible. Nobody owns the street. It’s hard enough to get a spot. Stop doing it. This isn’t the most peaceful city in the world so you're afraid what some moron might do if you pull a dining chair out from the street when you are coming home from a day of work trying to park. That one gets me fired up a little," one man said.

Residents who do not like the practice can call 311 on their neighbors, to report it.