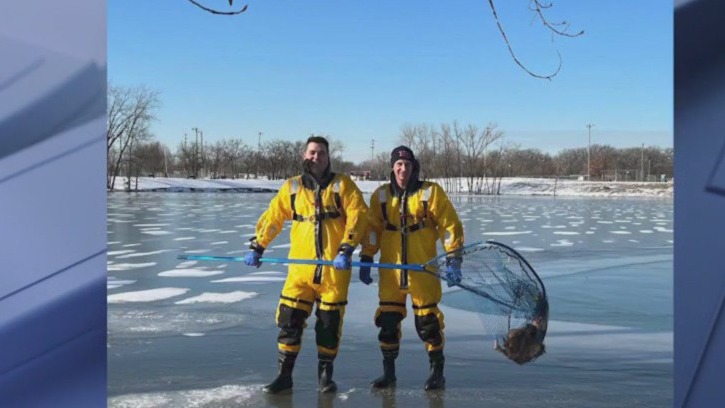 An owl is now recovering after it was rescued from a lake in Merrillville, Indiana.

Authorities rescued an injured owl from an ice covered lake Monday in Merrillville in northwest Indiana.

A DuPage County judge ordered Thursday a northwest Indiana man be held on $200,000 after he allegedly beat his girlfriend with a belt for hours before leading police on a high-speed chase.

A $150,000 winning ticket was sold at a northwest Indiana gas station for Saturday night's Powerball drawing.

A mother is in custody after her two young children were found alone and shivering in a cold apartment Monday afternoon in Merrillville, Indiana.

The man was found inside an apartment near 90th and Merrillville, the sheriff's office said. He was taken into custody by Crown Point police. No one was hurt.

Democrat Frank Mrvan won reelection to his northwestern Indiana congressional seat on Tuesday, surviving an expensive campaign in which Republicans made their first serious challenge in decades for the longtime Democratic stronghold.

Check your tickets, because a gas station in northwest Indiana sold a winning $1 million ticket for Monday's Powerball drawing.

NIGHTCLUB SHOOTING: When officers arrived, they found an unresponsive 34-year-old man near the entry, suffering from apparent gunshot wounds, police said. A 26-year-old woman was located inside the nightclub, also unresponsive.

Gary police said late Sunday that a “body” that had been found not far from where police located the SUV of missing Gary mom Ariana Taylor was actually a “life-sized silicone/rubber type female doll.”

Indiana State Police identified a now-deceased man on Tuesday as the suspect who raped and killed three women in Indiana and Kentucky in the late 1980s as they were working night shifts as motel clerks.

Gary police are searching for a woman whose SUV was found crashed and abandoned over the weekend in northwest Indiana.

The Mission One Foundation has donated about eight cars to veterans over the past four years.

A 28-year-old man was charged with attempted murder in connection with a double shooting last year in Chicago's Canaryville neighborhood.

Lake County Sheriff Oscar Martinez Jr. was indicted by a grand jury Thursday on a felony charge of resisting law enforcement and a misdemeanor charge of reckless driving stemming from an incident last year, according to the Lake County Prosecutor's Office.

Shots were fired inside the Southlake Mall in northwest Indiana Thursday morning.

There is no active threat to the public at this time and the mall is being evacuated "out of an abundance of caution," according to Hobart police.

One person was killed and another was wounded Saturday afternoon when a gunman opened fire on a crowd gathered for a funeral outside a church in Gary.

A statewide Amber Alert that was issued in Indiana after the disappearance of a 7-month-old baby from Merrillville has been canceled.